Mollie Orshansky and the Meaning of Poverty 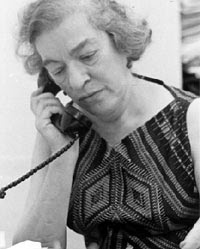 Mollie Orshansky, a woman whose research defined what "poverty" was during the 1960s "War on Poverty" and after is being remembered this week. She died in December at the age of 91. According to the New York Times:

In 1963 and 1964, Miss Orshansky conducted the research that would become the basis of the poverty thresholds. She used the economy food plan — the cheapest of four “nutritionally adequate” food plans developed by the Department of Agriculture — and multiplied the dollar costs by roughly three to come up with a minimum cost-of-living estimate. (A household food consumption survey by the Agriculture Department had shown that, in 1955, families of three or more people spent about one-third of their after-tax cash income on food.)

Miss Orshansky devised more than 120 poverty thresholds, adjusting her calculations for family size and composition and rural-urban differences. She published her research in a seminal 1965 article in The Social Security Bulletin.

President Lyndon B. Johnson had declared a War on Poverty, but there was no official definition of the problem at the time. In May 1965, the Office of Economic Opportunity, the federal agency charged with carrying out the antipoverty effort, adopted the “Orshansky index” as the yardstick to measure poverty.

It was a use that Miss Orshansky herself had never intended. “Orshansky developed the index as a research tool, not an instrument of policy of a criterion for determining eligibility for anti-poverty programs,” the historian Michael B. Katz wrote in “The Undeserving Poor,” a 1989 history of antipoverty efforts....
Miss Orshansky, whose parents had known poverty in Ukraine, worked for the Social Security Administration from 1958 until she retired in 1982. She was “one of a respected but mostly invisible cadre of women research professionals based at S.S.A. and other government agencies during the postwar years,” the historian Alice O’Connor wrote in “Poverty Knowledge,” a 2001 history of poverty research.


A feature on Defining Poverty, featuring Alice O'Connor and a discussion of Orshansky's work, was on NPR's Talk of the Nation in 2003, and can be heard on-line here.
Posted by Mary L. Dudziak at 10:38 AM