The Lost Promise of Civil Rights by Risa Goluboff (Virginia) has just been published by Harvard University Press. Here's the press description and blurbs: 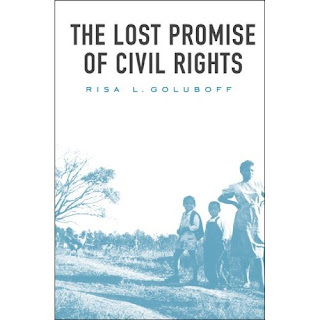 nt of the history of American civil rights law. The Supreme Court's decision in Brown v. Board of Education has long dominated that history. Since 1954, generations of judges, lawyers, and ordinary people have viewed civil rights as a project of breaking down formal legal barriers to integration, especially in the context of public education. Goluboff recovers a world before Brown, a world in which civil rights was legally, conceptually, and constitutionally up for grabs. Then, the petitions of black agricultural workers in the American South and industrial workers across the nation called for a civil rights law that would redress economic as well as legal inequalities. Lawyers in the new Civil Rights Section of the Department of Justice and in the NAACP took the workers' cases and viewed them as crucial to attacking Jim Crow. By the time NAACP lawyers set out on the path to Brown, however, they had eliminated workers' economic concerns from their litigation agenda. When the lawyers succeeded in Brown, they simultaneously marginalized the host of other harms--economic inequality chief among them--that afflicted the majority of African Americans during the mid-twentieth century. By uncovering the lost challenges workers and their lawyers launched against Jim Crow in the 1940s, Goluboff shows how Brown only partially fulfilled the promise of civil rights.

Reviews:
The Lost Promise of Civil Rights is brilliant. It will revolutionize our understanding of civil rights, what they mean, and where they come from. The Lost Promise of Civil Rights will be widely read and debated, and it will place Goluboff at the front rank of twentieth-century American historians. --Sarah Barringer Gordon, University of Pennsylvania Law School


Risa Goluboff offers readers a brilliant reconceptualization of civil rights litigation. Her book deals sensitively, and better than any other work, with how open to interpretation and development the idea of civil rights was in the 1940s, and how possibilities were gradually shut down. Combining a legal-realist sense of the openness of legal arguments with a historians sensitivity to the way in which real lawyers make real choices, Goluboff offers a model for legal history. --Mark Tushnet, Harvard Law School


A marvelous book. Elegantly written, prodigiously researched, and powerfully argued, Lost Promise recreates a pre-Brown universe in which civil rights included labor rights and a commitment to economic equality. The book places Goluboff at the forefront of a new generation of legal historians devising creative and novel ways of understanding the civil rights movement --Michael J. Klarman, author of From Jim Crow to Civil Rights


The Lost Promise of Civil Rights is original, provocative, and persuasive. By uncovering the forgotten history of the NAACP's labor litigation, Risa Goluboff opens up new ways of thinking about the tangled connections between racial and economic justice. When it came to the working class, the civil rights movement's march through the courts reached a dead end. This book is essential to understanding America's still unfinished struggle for equality. --Thomas J. Sugrue, author of The Origins of the Urban Crisis