Constitution Writing as a Summer Story: Reviewed: Stewart, Summer of 1787

THE SUMMER OF 1787: The Men Who Invented the Constitution by David O. Stewart gets a tepid review in today's New York Times from Michiko Kakutani, who throws in a plug for Akhil Amar. Kakutani writes, in part:
The story of h 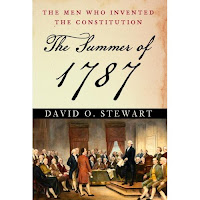 ow the Constitution was written, of course, has been told many times before: most notably in Catherine Drinker Bowen’s classic work “Miracle at Philadelphia,” as well as in books like Richard B. Morris’s “Witnesses at the Creation,” Clinton Rossiter’s “1787: the Grand Convention,” and “Decision in Philadelphia” by Christopher Collier and James Lincoln Collier.
The latest book about the framers, “The Summer of 1787,” does not shed a lot of new light on that momentous process. David O. Stewart, a lawyer specializing in constitutional law cases, has written a narrative that is far more descriptive than analytic. One of the few opinions he offers is that the delegates’ work on defining the office of the president was hasty and rushed and does “not compare well to their detailed outline for Congress.”

And given the many constitutional issues being debated today (concerning the war powers of Congress and the president, and the Bush administration’s efforts to amp up the prerogatives of the executive branch) the reader often wishes that the author had used his expertise to illuminate the origin and significance of key passages in the Constitution, the way, say, that Yale law professor Akhil Reed Amar did in his 2005 book “America’s Constitution: A Biography.”

Still, Mr. Stewart has done a nimble job of retelling a familiar story, showing how the Constitution evolved during those hot summer months in Philadelphia.
To read the rest, click here.
Posted by Mary L. Dudziak at 1:06 PM