LUDLOW, or labor history, in verse

Ludlow blends fact and fiction to recreate one of the most tragic events in American labor history. Much of the story follows a noble, endearing young man named Louis Tikas, an actual person who emigrated from Crete, lured here by promises of easy women. "Money flows like water," he hears, "rivers/ of money. A President named Rockefeller/ gives you a job the moment you disembark." Alas, things don't work out quite that way. He flounders around before finally taking work as a scab in the Colorado coal mines, which have been slowed by a violent strike. The men are essentially slaves: Their wages never cover the cost of room and board; they're surrounded by barbed wire and violent, armed guards. 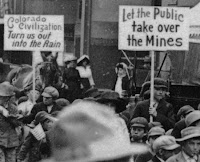 "In hell/ or, as he muttered to his fellow Greeks/ crouched in the dark, digging in its direction," Tikas quickly decides to strike, and when he does, he takes more than 60 others with him to the union hall. So begins his quick rise through the ranks of the local leadership. Sympathetic and alert, he's adept at keeping the peace in this explosive situation that eventually involves 1,300 people who speak 20 different languages. The logistics of managing all these laborers and their families living in tents in brutally cold weather with sporadic supplies (often held up by railway executives) would tax anyone's management skill. It's an exhilarating, dangerous career that brings him into contact with Mother Jones (marvelously recreated here) and se 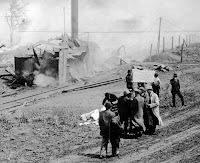 Ultimately, this isn't just a story about a brave labor activist, a "footnote nearly lost/ from the pages of the history books." Instead, in these stirring lines, Mason has written something far more personal: "We piece together Tikas as we make/ our own past from what evidence we find." Here's a chapter of our lives in cadences that will resonate with anyone who gives them a chance.


An overview of the Ludlow Massacre, with striking images, including the ones in this post, is at the Denver Public Library website.
Posted by Mary L. Dudziak at 11:49 AM