Edmund and Marie Morgan review six books on Jamestown in the New York Review of Books. The essay begins:

In the procession of anniversary celebrations by which we congratulate our predecessors for begetting us, 2007 is the year to honor our shaky beginnings at Jamestown, Virginia. The 108 men and boys who stepped ashore on May 14, 1607, and the four or five thousand who followed them in the next fifteen years were the victims of a failed business enterprise. But enough of them survived starvation and disease, their sponsors' negligence, and their own mistakes to start the first permanent settlement in what became the United States.

The early Virginians have generally been upstaged by the Pilgrim Fathers in our national memory. It is not clear how the Pilgrims, who landed at Plymouth thirteen years after them, gained the name of fathers, fathers not merely of New England but of the nation. Perhaps Jamestown lost out because Captain John Smith, who told the Jamestown saga with himself as the central actor, did not make a good father figure. He was twenty-eight when he arrived at Jamestown, left less than three years later, and never returned. William Bradford, who led the Pilgrim fathers, was only thirty in 1620, but in his classic account of the colony he writes like a father, while Smith writes like the soldier he was. Smith came out of the England of Marlowe and Shakespeare, Bradford from the England of Milton. 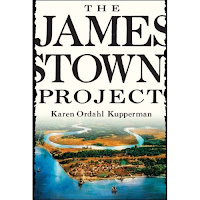 The Library of America has now produced a volume of Smith's writings. It includes a dozen accounts of Virginia by fellow founders, but they all fall under his shadow as the man who mattered and knew it. The same is true of the volumes by modern scholars reviewed here: Karen Kupperman on the different forces behind the Virginia enterprise, James Horn and Benjamin Woolley on Smith's strategies as a leader, William Kelso on archaeological evidence of what the settlers did under Smith, Helen Rountree on the way the Indians regarded him. Each of them offers a different perspective for modern readers, but they are all, in some sense, commentaries on Smith. And this review, too, is an interpretation of what his career reveals about American beginnings.

The books discussed are:

Savage Kingdom: The True Story of Jamestown, 1607, and the Settlement of America by Benjamin Woolley (HarperCollins)

A Land as God Made It: Jamestown and the Birth of America by James Horn (Basic Books)