Reviewed: Sandage, Born Losers: A History of Failure in America

How's this for a book topic? Scott A. Sandage, Born Losers: A History of Failure in America (Harvard University Press) is reviewed by Ronald J. Zboray and Mary Saracino Zboray, both of the Department of Communication, University of Pittsburgh on H-SHEAR.
Has anyone written about losers in legal history? Who, for example, would be the Willy Loman of American law?
Zboray and Zboray begin: 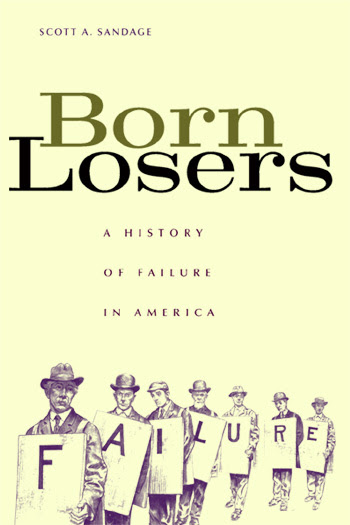 In the epilogue of Born Losers: A History of Failure in America, Scott A. Sandage quotes a pivotal line from Arthur Miller's play, Death of a Salesman, that haunts his entire book: "Attention, attention must be finally paid to such a person" (p. 263). The person is, of course, Willy Loman, the quintessential loser of American dreams. Sandage, an associate professor of history at Carnegie Mellon University, reminds us that Loman represents but a long line of economic "failures" in American history who, for the most part, have been ignored or studied outside of the ever-changing, historical-cultural definitions of success. Thus Sandage pays heed to Linda Loman's injunction to remember and, above all, respect the real-life Willy Lomans on every page of Born Losers.

In this regard, Sandage's first book, winner of the Thomas J. Wilson Prize, succeeds admirably. We are introduced, chapter after chapter, to mainly white businessmen and sometimes their wives, who, from the panics of 1819 to 1893, fell into monetary trouble. Many of these people--mostly nobodies today--left diaries, commonplace books, account books, or sets of correspondence from which Sandage draws his most memorable material. We hear the anguish of Philadelphian Joseph Horner, a hardware dealer, who, after investing in a steamboat, was unable to pay debts during the first panic: "What is to become of us ... I know not" (p. 29). We experience the torment of New Hampshire's John Flagg, who in 1825 wrote he had "gushed into tears many a time," for fear of not securing a stable business (p. 70). Quotes from so-called begging letters of the Gilded Age supplicating wealthy men show just how desperate some "losers" were. The wife of one such man even asked him to write to John D. Rockefeller of her (literal) nightmare in which she "climbed a great hill, 'weak and worn and with clothing torn off,'" in the hopes he would give her husband a place at Standard Oil (p. 226). What Sandage is able to wrest from the numerous collections of personal papers he read at various archives is often astonishing. The liberal deployment of quotations that chew up pages--no easy task when working within editorial constraints about word length, as we well know--is commendable. Sandage, an effective writer himself, allows his long-forgotten informants to have their own say.
Although desperation and regret bind together losers from all eras, concepts of what it meant to fail evolved over time.
To continue reading, click here. For the Born Losers book website, click here.
Posted by Mary L. Dudziak at 10:43 AM