Norgren, Belva Lockwood: The Woman Who Would be President

Belva Lockwood: The Woman Who Would be President, by Jill Norgren, has been published by NYU Press. The book includes a Forward by Justice Ruth Bader Ginsburg. Here's the press description and blurbs:

In Belva Lockwood: The Woman Who Would be President, prize-winning legal historian Jill Norgren recoun 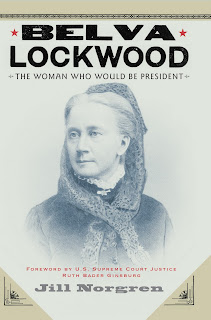 ts, for the first time, the life story of one of the nineteenth century's most surprising and accomplished advocates for women's rights. As Norgren shows, Lockwood was fearless in confronting the male establishment, commanding the attention of presidents, members of Congress, influential writers, and everyday Americans. Obscured for too long in the historical shadow of her longtime colleague, Susan B. Anthony, Lockwood steps into the limelight at last in this engaging new biography.

Born on a farm in upstate New York in 1830, Lockwood married young and reluctantly became a farmer's wife. After her husband's premature death, however, she earned a college degree, became a teacher, and moved to Washington, DC with plans to become an attorney-an occupation all but closed to women. Not only did she become one of the first female attorneys in the U.S., but in 1879 became the first woman ever allowed to practice at the bar of the Supreme Court.

In 1884 Lockwood continued her trailblazing ways as the first woman to run a full campaign for the U.S. Presidency. She ran for President again in 1888. Although her candidacies were unsuccessful (as she knew they would be), Lockwood demonstrated that women could compete with men in the political arena. After these campaigns she worked tirelessly on behalf of the Universal Peace Union, hoping, until her death in 1917, that she, or the organization, would win the Nobel Peace Prize.

Belva Lockwood deserves to be far better known. As Norgren notes, it is likely that Lockwood would be widely recognized today as a feminist pioneer if most of her personal papers had not been destroyed after her death. Fortunately for readers, Norgren shares much of her subject's tenacity and she has ensured Lockwood's rightful place in history with this meticulously researched and beautifully written book. Jill Norgren is Professor Emerita of Government at John Jay College and the Graduate Center of The City University of New York
"Norgren has rescued Lockwood's extraordinary story from relative obscurity. . . . Like Shakespeare's Portia, Lockwood used wit, ingenuity, and sheer force of will to unsettle society's conceptions of her sex."
--From the Foreword by Ruth Bader Ginsburg, Associate Justice, Supreme Court of the United States
"In this thoroughly researched and beautifully written biography, Jill Norgren traces Belva Lockwoods dogged efforts to earn a living as a lawyer in Washington while caring for her daughter and becoming a leading advocate for womans suffrage and the peaceful arbitration of international disputes. Norgrens brilliant study makes clear why Lockwood—the first woman to argue before the Supreme Court (1879) and run for President (1884 and 1888)—belongs in the ranks of Susan B. Anthony, Elizabeth Cady Stanton, and Frances Willard."
—John M. Ferren, author of Salt of the Earth, Conscience of the Court: the Story of Justice Wiley Rutledge
"Jill Norgren beautifully weaves the personal and political ordeals of Belva Lockwood's life into a compelling story that illuminates Lockwood's enduring contributions. This is a dramatic account of a pioneering woman whose life in the law still resonates in contemporary times."
—Joan Biskupic, author of Sandra Day O'Connor: How the First Woman on the Supreme Court Became Its Most influential Justice

"Jill Norgren's splendid biography of one of history's most astonishing pioneers-first woman counsel before the Supreme Court, visionary for equal rights, international peace activist, Indian rights litigator, presidential candidate-is provocative, challenging, galvanizing! Brilliantly researched, vividly written, and profoundly discerning. Everybody concerned about justice, human rights, the future of democracy, and women's power will rush to read, and assign, this important book."
—Blanche Wiesen Cook, author of Eleanor Roosevelt "Jill Norgren's biography of Belva Lockwood is a gem. Not only does she describe the amaingly full life of an important woman now practically forgotten, but she takes us into the politics of the late-nineteenth-century women's reform movement in a way few authors have done. This is a must-read book."
-- Melvin I. Urofsky, editor of the Journal of Supreme Court History

For a video of a book event with Norgren and Justice Ginsburg at the Wilson Center, click here.
Posted by Mary L. Dudziak at 10:01 AM