RITUALS OF VIOLENCE IN NINETEENTH-CENTURY PUERTO RICO: INDIVIDUAL CONFLICT, GENDER, AND THE LAW (University Press of Florida), by Astrid Cubano Iguina, is reviewed by Charles R. Venator Santiago, Department of Politics, Ithaca College on the Law and Politics Book Review. Santiago begins:
In recent years we have seen an increase in conferences and publications in the Un 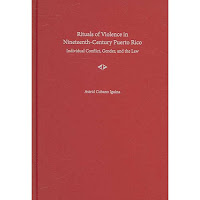 ited States addressing the anomalous constitutional status of Puerto Rico (e.g. Duffy Burnett and Marshall 2001; Rivera Ramos 2001; Sparrow 2006). These conferences and publications have been part of a broader push to re-evaluate the importance and relevance of the INSULAR CASES, a series of Supreme Court rulings dating back to 1901, to a more comprehensive understanding of US legal history and constitutional interpretation more generally. The study of the INSULAR CASES and the case of Puerto Rico in particular, provides an interesting and enduring example of the ways that the law has been used to institutionalize imperialist ideologies and to subordinate US citizens residing in this unincorporated territory to a second-class status. To be sure, to this day Puerto Rico remains an unincorporated territory that can be treated as a foreign country for constitutional purposes, and US citizens residing in the island can be denied basic rights such as a 6th Amendment trial by jury (USGAO 1991: 33). Yet these publications have taken the INSULAR CASES as an historical point of departure for the understanding of the formation of the rule of law in Puerto Rico overshadowing the influence of Spanish colonial law, which after all had been present in the island in various forms for more than four hundred years. More importantly, given the training of legal actors in Puerto Rico, and the establishment of a mix-law system in the island that incorporated some aspects of Spanish legal traditions, it is especially important to understand the institutional context of the Spanish legal system in the island before the US occupation in order to understand the emergence of the rule of law in Puerto Rico. Astrid Cubano Iguina’s path-breaking book provides a clear and comprehensive socio-legal history of the late nineteenth-century Puerto Rico anteceding the Spanish-American war of 1898.
Drawing on extensive archival legal records and focusing on local court rulings from the Arecibo municipality/judicial district, this book weaves together a narrative that connects individual or quotidian disputes with broader social-legal ideologies and practices. Cubano Iguina specifically addresses the relationship between interpersonal violence, gendered subjectivities, and police and judicial intervention during a complex period of social-economic transformations such as the abolition of slavery and the transition to a wage-labor economy. In a sense, the Spanish colonial courts become a contested terrain where individuals negotiate multiple dimensions of their [*309] social realities during a time of socio-economic transformations. This focus enables Cubano Iguina to show how individual claims often reflect broader social narratives.
Cubano Iguina’s work not only fills an historical vacuum, but also offers a refreshing alternative to traditional nationalist Puerto Rican historiography.

For the rest of this interesting review, and references cited, click here.
Posted by Mary L. Dudziak at 12:59 PM