Corcos on The Use of Tocqueville's Writing in U.S. Judicial Opinions 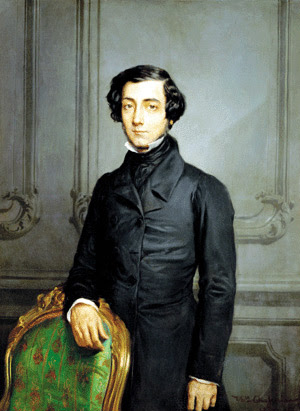 Christine A. Corcos, Louisiana State University, has posted a new essay, A Man for All Reasons: The Use of Tocqueville's Writing in U. S. Judicial Opinions. It is forthcoming in the Louisiana Law Review (2008). Here's the abstract:
The United States has never been given to particular adoration of foreign observers of its mores, who quite often turn out to be critics rather than admirers. Nevertheless, one of its favorite visitors since his one and only appearance on the scene in 1831-1832 is the 25-year-old magistrate Alexis de Tocqueville, sent by his government to study penal reform in the new republic. Tocqueville and his good friend Gustave de Beaumont, like young adventurers before and since, took the opportunity to extend their stay, and turned their tour of prisons into a journey through the young nation that furnished the raw material for what readers ever since have considered to be the single most insightful study of the United States ever written. Since the publication of Tocqueville's study, titled De la democratie en Amerique, which appeared in English in 1835, the second volume following in 1840, all manner of students of U. S. society have pored over it, studying it, quoting and misquoting it, and claiming it as support for their varied ideas. Both conservatives and liberals have claimed Tocqueville as a founding father of their thought. But as John Lukacs points out, Tocqueville cannot be so simply categorized.
Through all of these evaluations, assessments and hagiographies, commentators sometimes lose sight of the fact that Tocqueville was, by training and choice, an attorney, and what is more, a civil law trained attorney, a magistrate, a member of the Legislative Assembly, a drafter of the Constitution of France's Second Republic and a member of Louis-Napoleon Bonaparte's Cabinet. Ultimately, as one student of his thought points out, it may not matter.
As a civilian, Tocqueville was trained in a newly formed legal regime. As an attorney practicing within a code enacted only a year before his birth, he had a vital interest in determining how such new codes could be integrated into existing social, political, and legal environments. His interest in the new republic across the ocean, which was engaged in a similar experiment, was at once philosophical and practical. Thus, what use U. S. judges have made of his words in their own opinions is certainly of interest.
Image credit.
Posted by Mary L. Dudziak at 7:47 AM