A Patriot's History of the United States 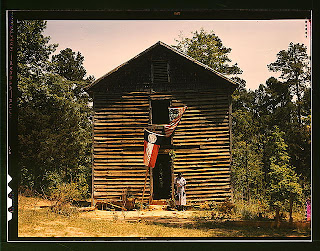 I was in the Barnes and Noble in Tuscaloosa recently--yes, it's been almost exactly 25 years since I first set foot in the Barnes and Noble flagship store in Manhattan. Lots and lots of water under the bridge since then. But it's a pleasant surprise to still feel a little of that magic from that day long ago, now in Tuscaloosa. I spotted a copy of A Patriot's History of the United States on the remainder table. I'd skimmed this a year or so ago when it first came out, before I sent it out for review in Law and History Review.

I wanted to spend some more time with it and figured it a worthwhile investment at $6.98. (You may recall that I think book pricing is critical, if you want to get the book into the hands of readers. As Joe Jackson might say, there goes your proof.)

The authors (Larry Schweikart and Michael Allen) say that they are trying to be different from much other recent history, which focuses on the failings of our country rather than its successes. Their book begins in this way:

Is America's past a tale of racism, sexism, and bigotry? Is it the story of the conquest and rape of a continent? Is US history the story of white slave owners who perverted the electoral process for their own interests? Did America start with Columbus' killing all the Indians, leap to Jim Crow laws and Rockefeller crushing the workers, then finally save itself with Franklin Roosevelt's New Deal? The answers, of course, are no, no, no, no, and NO.

However, I think much of it is largely a change in emphasis rather than substance. (Their interpretation of some twentieth-century history may be different--on this I have no opinion right now.) There are pieces of the book that I find down-right mainstream--like the interpretation of the coming of the Civil War. Once a key battleground of historical interpretation, the authors view slavery as a central piece of the story and do not blame the silly abolitionists for causing a needless war. In fact, its focus on Christianity's critique of slavery lifts the abolitionists up as heroes.

Pretty interesting stuff and probably worth a read as well--even if you might have answered a partial yes to at least one of the questions that Schweikart and Allen pose.

I thought you might enjoy Jack Delano's 1941 photograph of a woman standing by a house flying the United States and Georgia flags near White Plains, Georgia, from our friends at the Library of Congress, by way of illustration.
Posted by Alfred Brophy at 9:41 AM