In Brown's Wake: Legacies of America's Educational Landmark by Dean Martha Minow, Harvard Law School, has just been published by Oxford University Press. SCOTUS Blog features a Q and A with Minow about the book. 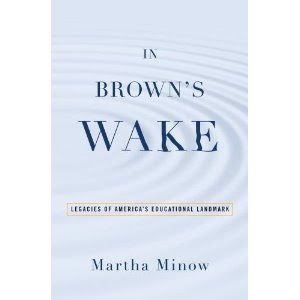 What is the legacy of Brown vs. Board of Education ? Well known for establishing racial equality as a central commitment of American schools, the case also inspired social movements pursuing equality in education for students across all lines of difference, including language, gender, disability, immigration status, socio-economic status, religion, and sexual orientation. Yet, more than a half-century following Brown, schools, parents and policy makers still debate whether the ruling requires all-inclusive classrooms, and today American schools appear to be more segregated than ever. School choice, once a strategy for avoiding racial integration, has emerged as a method for racial mixing in some school systems, even as magnet and pilot schools, charter schools, and vouchers for private schools enable new forms of self-separation by language, gender, disability, and ethnicity.

In In Brown's Wake , Martha Minow examines the way that Brown continues to reverberate over a wide-spectrum of equality issues in public and school choice programs. She argues that the terms placed on such initiatives carry serious consequences for both the character of American education and civil society itself. Though the original promise of Brown remains more symbolic than effective, Minow demonstrates the power of its vision in the struggles for equal education regardless of students' social identity, in the United States and internationally. Further, she urges renewed commitment to the project of social integration even while identifying the complex routes necessary to achieve it. A concise introduction to Brown and its aftermath, In Brown's Wake explores surprising and widespread effects of one of the most important Supreme Court decisions of the century with elegance and economy.

The SCOTUS Blog Q & A by Erin Miller includes this:

Q. I'm curious about your concept of "wake" as you use it in your title, In Brown's Wake. What causal role do you think Brown played in the legal and policy developments that you discuss in the book? How would those events have happened differently - if at all - without Brown?

A. Causal analysis and "what if" questions are always problematic when one analyzes history because there are multiple causal paths to any complex occurrence - and certainly changes in social movements and in the treatment of groups in America are complex occurrences. But I do think it's pretty clear that in each of the strands that I pursue - Brown as a decision by the Supreme Court, Supreme Court litigation as a vehicle for changing the treatment of students in schools, and the legislative repercussions of Brown - each contributed to mobilization of groups around issues of immigrant status in the schools, gender, disability, religion, and other identity categories....

Q. Let's turn to your chapter on the international effects of Brown. You say that, for segregated communities abroad, Brown was a symbol of equal opportunity and an inspiration for their own legal battles. But as we said before you also believe that Brown has been undermined in the United States by re-segregation. Has the perception of Brown changed abroad, too?

A. I think that Brown continues to have resonance in many parts of the world for its aspirational qualities even more than for its disappointing results in terms of actual racial integration. Take for example the education of Roma children in the Czech Republic, as well as the continuing separate education of Protestant and Catholic students in North Ireland and of black South Africans and white South Africans. When it's invoked in those contexts, Brown does seem to inspire lawyers and advocates to pursue integration. It also has inspired social scientists studying communities in each of those contexts.

I was intrigued a great deal that the repercussions of Brown in the U.S. for the treatment of students with disabilities and for students who speak a different language at home than the language spoken in schools recur in the advocacy effort in contexts like the Czech Republic, South Africa, and Northern Ireland. So the complicated legacies of Brown across many of these dimensions recur in the international context. One reason they recur is that the debate about whether equal educational opportunity is best served by integration or instead by separate instruction is particularly acute in the context of students with disabilities and language differences.