A Woman's Crusade: Alice Paul and the Battle for the Ballot by Mary Walton is reviewed today in the Los Angeles Times.  Two books on Henry Clay, AT THE EDGE OF THE PRECIPICE: Henry Clay and the Compromise that Saved the Union by Robert V. Remini, and  HENRY CLAY:  The Essential American by David S. Heidler and Jeanne T. Heidler are reviewed together by Heather Cox Richardson in the Washington Post.

Books on war predominate this week.  THE KOREAN WAR:  A History by Bruce Cummings is taken up in the Washington Post and the New York Times.  The Post review, by Korean War scholar William Stueck, is more informative. (I'd add that among the more notable recent books on "the forgotten war" a must-read for U.S. historians is Steven Casey, Selling the Korean War: Propaganda, Politics, and Public Opinion in the United States, 1950-1953.) 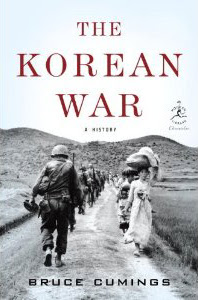 Also in the Washington Post, a joint review from Gerard De Groot of WASHINGTON RULES: America's Path to Permanent War by Andrew J. Bacevich, and CULTURES OF WAR: Pearl Harbor/Hiroshima/9-11/Iraq by John W. Dower.  (Bacevich is one of the books I'm reading right now -- and I'd call it a highly readable, almost breezily written account of the nation's path to a on-going war.  Bacevich begins with a compelling narrative of his own enlightenment in post-Cold War Berlin, which makes the book difficult to put down.  There is no nuance in this account, but Bacevich builds upon the expertise from his own prodigious body of work and that of others, and his purpose here is a call to action, solidifying Bacevich's role as a compelling critic of contemporary U.S. foreign policy.)

1939:  Countdown to War by Richard Overy is also reviewed in the Washington Post.  The Last Stand: Custer, Sitting Bull, and the Battle of the Little Bighorn by Nathaniel Philbrick is taken up in The New Republic's The Book.  Finally, THE SULTAN'S SHADOW:  One Family's Rule at the Crossroads of East and West by Christiane Bird is reviewed in the New York Times by Andrew Wheatcroft who takes a swipe at academia, noting that "the iron laws of academic research have now largely excluded histories like this one."  At least he engages the book, which can't be said of last week's anti-intellectualism.

More books news can always be found from Ralph Luker at Cliopatria.
Posted by Mary L. Dudziak at 12:17 PM