Crisis and Consequence at the Hagley Library

The Center for the History of Business, Technology and Society at the Hagley Museum and Library will be holding a timely and interesting conference on November 4-5, Crisis and Consequence. The speakers appear below; the Hagley's announcement is here. 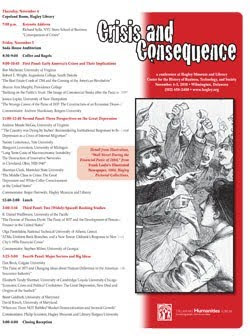 Ron Michener, University of Virginia and Robert E. Wright, Augustana College, South Dakota, “The Real Estate Crash of 1764 and the Coming of the American Revolution”

Sharon Ann Murphy, Providence College, “Banking on the Public’s Trust: The Image of Commercial Banks after the Panic of 1819”

Jessica Lepler, University of New Hampshire, “The Strange Career of the Panic of 1837: The Construction of an Economic Disaster”

Andrew Meade McGee, University of Virginia, “‘The Country was Dying by Inches’: Reconsidering Institutional Responses to the Great Depression as a Crisis of Internal Migration”

Shannan Clark, Montclair State University, “The Middle Class in Crisis: The Great
Depression and White-Collar Consciousness in the United States”

R. Daniel Wadhwani, University of the Pacific, “The Demise of Thomas Dyott: The Panic of 1837 and the Development of Personal Finance in the United States”

Dan Bouk, Colgate University, “The Panic of 1873 and Changing Ideas about Human Difference in the American Life Insurance Industry”