Legal historian Laura Kalman has a new book, Right Star Rising: A New Politics, 1974-1980, and it gets a review today in the New York Times. Unfortunately 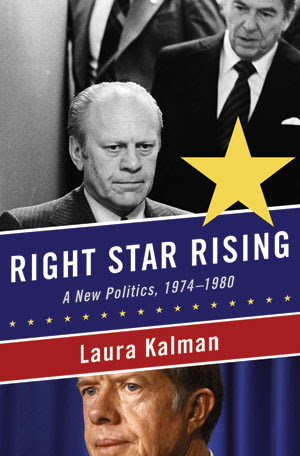 David Frum, offers a snarky review that is really about whether there is any contemporary value in history books. "What’s the point of this kind of history in the age of the Internet?" he asks. It seems that books on political history are of value only if they uncover new scandals we can blog about.

Frum can usually be found at FrumForum.com, a politics site that today has a headliner about Governor Chris Christie of New Jersey, and the next photo down the page under FF Weekend is of a woman posing in a bikini purportedly grilling hamburgers. It's a diet feature. Yes, it's hard to compete with HuffPo. But it does make you yearn for an old-fashioned book that keeps its focus on American politics.

So what do others say about Kalman's new effort? Earlier reviewers appear to have easily found what eluded Frum: Kalman's arguments and analysis. Here are three (I can only post excerpts):

The 1970s emerge as a time of drift and chaos that nonetheless fundamentally realigned America, in this cogent, though not quite groundbreaking, study of the Ford and Carter presidencies....As Democrats and moderate Republicans floundered, Kalman contends, a New Right comprising neoconservative hawks, evangelicals, supply-siders, tax rebels, and conservative populists capitalized on these crises to mount a compelling attack on the liberal consensus. To Kalman, these developments are epitomized by the perpetually vacillating Gerald Ford and, especially, Jimmy Carter...whose weak leadership paved the way for the triumph of Ronald Reagan's forceful conservatism.

Liberal historians, among whom Kalman counts herself, continue to puzzle over the election of Ronald Reagan. Sean Wilentz in The Age of Reagan (2008) argues Reagan's election was the American electorate's repudiation of liberal overreach, but Kalman holds that voters rejected Jimmy Carter, not liberalism. [As to]...how conservatives rose to power,...Kalman interprets their success as capitalizing on opportunities such as opposition to compulsory school integration, affirmative action, the ERA, and détente with the USSR....[I]t is within Carter's presidency that Kalman searches most deeply for clues to the advent of Reagan....On top of the facts and making her case, Kalman earns the political-history audience. --Gilbert Taylor

Kasey S. Pipes, a former speechwriter for George W. Bush, has this to say in the Dallas Morning News:

How did a 69-year-old conservative former actor get elected president in a landslide? Laura Kalman tries to answer that question in her new book, Right Star Rising: A New Politics, 1974-1980.

Kalman argues that to understand Ronald Reagan's triumph in 1980, it's essential to first understand the failures of Gerald Ford and Jimmy Carter in the 1970s. She builds the case that the 1970s were a time of great tumult in American society and politics, if only because it saw so many of the dreams born in the 1960s bloom and then wilt into policy nightmares. She is interested in how so much of the 1960s "sputtered out" in the 1970s.

And what a sputtering it was.

Read a preview of the book here.
Posted by Mary L. Dudziak at 10:41 AM