Kutler vs. Nixon, Round ?

We have the following from an article entitled Historians Want Court to Unseal Nixon Testimony in the Blog of the Legal Times:

A group of historians is asking the Washington federal district court to exercise its “inherent supervisory authority” to unseal the 1975 grand jury testimony of former President Richard Nixon. 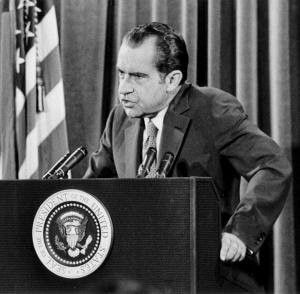 Historian Stanley Kutler, the American Historical Association, American Society for Legal History, Organization of American Historians, and Society of American Archivists filed a petition yesterday seeking the transcript of Nixon’s testimony on June 23 and June 25, 1975, and related documents of the Watergate Special Prosecution Force. The records are at the National Archives and Records Administration in College Park, Md.

“Today, Watergate continues to captivate historians and the public alike,” writes the historians’ counsel, Allison Zieve of Public Citizen Litigation Group, in the petition, In Re Petition of Stanley Kutler. “Despite the many books, films, plays, and television programs that have addressed the scandal and its players, unanswered questions remain. New theories and revised narratives are proposed. Mr. Nixon’s grand jury testimony continues to be a source of speculation for Nixon scholars and others.”

The Washington Post's story, which also refers to the opening of grand jury testimony in the Hiss and Rosenberg cases, is here.

Image credit: Kutler; Nixon
Posted by Dan Ernst at 1:41 AM