[Because I recently attended a planning session that has left me quite excited about this event, I'm moving this post up from last month.]

The Historical Society of the District of Columbia Circuit and the Litigation Section of the District of Columbia Bar Present The D.C. Circuit in the McCarthy Era: United States v. Lattimore, to be held Thursday, May 12, 2011, from 4:30 p.m. – 6:00 p.m. in the Ceremonial Courtroom, 6th Floor, E. Barrett Prettyman U.S. Courthouse, 3rd Street & Constitution Avenue, N.W., Washington, D.C. 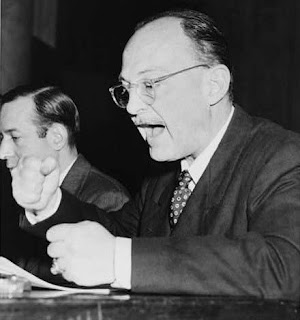 In 1952, during the height of McCarthyism, Owen Lattimore was indicted on seven counts of perjury before the Senate Internal Security Subcommittee, including testimony that “he had never been a sympathizer or any other kind of promoter of Communism or Communist interests.” Lattimore was represented pro bono by former D.C. Circuit Judge Thurman Arnold, Abe Fortas, and Paul Porter; the United States by U.S. Attorney Leo Rover. Lattimore moved to dismiss. District Judge Luther Youngdahl dismissed four counts. The Court of Appeals, en banc, sustained the dismissal of two counts and reversed on two counts. The Government re-indicted Lattimore in a single count which Judge Youngdahl dismissed. The Court of Appeals sustained the dismissal by a 4-4 vote.

This program will include a reenactment of the arguments presented to Judge Youngdahl on the Motion to Dismiss. Following this reenactment, a panel of all the participants will discuss the role of the courts in national security cases at mid-century and the relevance of that history today

Participants
The McCarthy Era and the State of the Nation in the 1950s
Martin Sherwin, Professor, George Mason University

Image credit: Owen Lattimore, with Abe Fortas
Posted by Dan Ernst at 12:45 AM