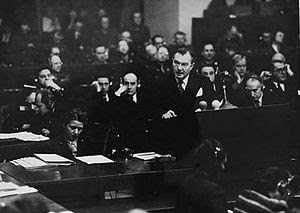 The 2011 edition of the James McCormick Mitchell Lecture, the University at Buffalo Law School's highest-profile lecture series, revisits a significant historical moment for UB and the world - one that has been largely overlooked. The event on Tuesday, Oct. 4, is an occasion to examine a major address by United States Supreme Court Justice Robert H. Jackson, given at the University of Buffalo centennial exactly 65 years before. Jackson, who had taken a leave of absence from the high court to serve as the chief U.S. prosecutor at the Nuremberg war crimes trial in occupied Germany, spoke at UB immediately after he returned from that historic trial in 1946. His speech touched on timeless themes: how a "warlike spirit" can overcome a nation; the quest for nations to work cooperatively in the cause of peace; the interrelationship of war and dictatorship; and the supremacy of law over the lawless forces of war and persecution.

Three legal scholars will discuss aspects of Jackson's 1946 address, placing the speech in historical context and discussing its enduring implications. The Mitchell Lecturers will be:

John Q. Barrett, professor of law at St. John's University in New York City and a board member at the Robert H. Jackson Center in Jamestown, N.Y., who will discuss "Bringing Nuremberg Home: Justice Jackson's Path Back to Buffalo, Oct. 4, 1946." Barrett is writing a biography of Justice Jackson.

Eric L. Muller, professor at the University of North Carolina School of Law and a legal historian with special interest in the Japanese internment cases during the World War II era, who will discuss "Nazis, Americans and the Law as a `Peace Profession.'"