Just out from the Stanford University Press is Henry Ford’s War on Jews and the Legal Battle against Hate Speech, by Victoria Saker Woeste of the American Bar Foundation.  According to the Press: 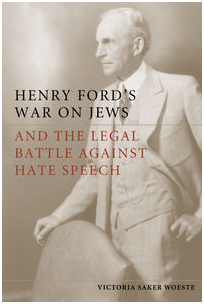 Henry Ford is remembered in American lore as the ultimate entrepreneur—the man who invented assembly-line manufacturing and made automobiles affordable. Largely forgotten is his side career as a publisher of antisemitic propaganda. This is the story of Ford's ownership of the Dearborn Independent, his involvement in the defamatory articles it ran, and the two Jewish lawyers, Aaron Sapiro and Louis Marshall, who each tried to stop Ford's war.

In 1927, the case of Sapiro v. Ford transfixed the nation. In order to end the embarrassing litigation, Ford apologized for the one thing he would never have lost on in court: the offense of hate speech.

Using never-before-discovered evidence from archives and private family collections, this study reveals the depth of Ford's involvement in every aspect of this case and explains why Jewish civil rights lawyers and religious leaders were deeply divided over how to handle Ford.


"It is not often that I read a book that is as important, well-researched, and well-written as Henry Ford's War. This volume, based upon primary sources that have for the most part never been examined before, brilliantly recreates the legal struggle against Ford's Dearborn Independent and underscores its larger significance. Anyone interested in Henry Ford, in antisemitism, or in legal battles against hate speech will want to read this book."—Jonathan D. Sarna, Brandeis University

"Victoria Saker Woeste gives us great courtroom drama and captures an important historical moment. This will be the definitive work on Henry Ford and his confrontation by American Jews. Woeste not only presents and explains what was at stake on the basis of significant new evidence, she brings to her analysis the legal expertise to exploit a whole body of secondary literature that most historians are simply unable to evaluate."—Richard S. Levy, University of Illinois at Chicago

The book has just received  a notice in the Detroit Legal News.

On June 26, the ABF will cohost a launch for the book in the "Million Dollar Courtroom," Room 730, Theodore Levin United States Courthouse, 231 West Lafayette Blvd., Detroit, MI, which is the same courtroom in which Sapiro v. Ford was tried.
Posted by Dan Ernst at 12:30 AM