We note the appearance in paper from Cambridge University Press of Daniel F. Rice’s Reinhold Niebuhr and His Circle of Influence.  Note particularly that one of Rice’s seven interlocutors–in fact, the final one he takes up–is Felix Frankfurter. 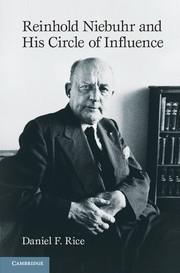 Reinhold Niebuhr, the prominent American theologian, was one of the few religious figures who had a significant impact on the broader society outside the theological community in the United States during the twentieth century. Niebuhr's influence was most pronounced among those associated with historical studies and politics. This book presents Niebuhr in dialogue with seven individuals who each had a major influence on American life: the theologian Paul Tillich, philosopher/educator John Dewey, socialist Norman Thomas, historian Arthur Schlesinger Jr., international political theorist Hans Morganthau, diplomat George Kennan, and Supreme Court Justice Felix Frankfurter. Through a detailed examination of Niebuhr's interactions with these figures, Daniel F. Rice's study offers a survey of mid-twentieth-century theology, political thought, and culture.