Mary Sarah Bilder, Professor of Law and Michael and Helen Lee Distinguished Scholar at Boston College Law School, has just published Madison’s Hand: Revising the Constitutional Convention with the Harvard University Press.  (She also discusses the book in a post out today on HNN, entitled, Why We Shouldn’t Think for a Moment that James Madison’s Notes on the Constitutional Convention Were Objective.)  Among the controversies the book addresses is the place of slavery in the Constitution.  For example, in an op-ed in today's New York Times, Sean Wilentz, relying in part on Madison's Notes, argues that the framers did not intend to make slavery a "national institution."  Professor Bilder would not argue to the contrary, but she believes Madison's post-convention revisions made the Virginians seem enlightened and the delegates from the Deep South solely responsible for the Constitution's protections of the slavery, when neither was the case. 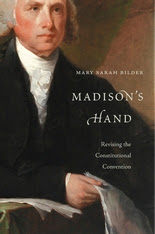 James Madison’s Notes on the 1787 Constitutional Convention have acquired nearly unquestioned authority as the description of the U.S. Constitution’s creation. No document provides a more complete record of the deliberations in Philadelphia or depicts the Convention’s charismatic figures, crushing disappointments, and miraculous triumphs with such narrative force. But how reliable is this account?

In an unprecedented investigation that draws on digital technologies and traditional textual analysis to trace Madison’s composition, Mary Sarah Bilder reveals that Madison revised the Notes to a far greater extent than previously recognized. The Notes began as a diary of the Convention’s proceedings. Madison abandoned the project at a critical juncture, however, and left the Notes incomplete. He did not return to finish them until several years later, largely for Thomas Jefferson. By then, Madison’s views were influenced by the new government’s challenges and Jefferson’s political ideas. Madison’s evolving vision of republican government, his Virginia allegiances, his openness to constitutional protection for slavery, his fascination with the finer points of political jockeying, and his depictions of Alexander Hamilton and Charles Pinckney shifted during the writing and rewriting of his account. When the Notes were finally published in 1840, the layers of revision were invisible.

Madison’s version of events quickly assumed an aura of objectivity, and the Notes molded the narrative of the Constitution. Madison’s Hand offers readers a biography of a document that, over two centuries, developed a life and character all its own.

Jack Rakove calls the book “a major contribution to our understanding of the Constitutional Convention.”  Richard Beeman writes:


Every historian who has ever written about the Constitutional Convention has used James Madison’s ‘Notes’ as a fundamental primary source. And although nearly all are aware of the fact that Madison revised his notes over time, no one has ever attempted a systematic study of the nature of those revisions or of the significant ways in which those changes might have altered our understanding of the Convention. Madison’s Hand is an exceptionally important piece of work that will have a profound impact on all future work on the Constitutional Convention."

Endorsements from Michael McConnell, Garrett Epps, and Eric Nelson and the TOC after the jump.

“For nearly two centuries, Madison’s ‘Notes’ have been regarded as secular scripture: an inerrant, authoritative, and complete account of the drafting of the Constitution. Bilder reveals them instead as an intricate palimpsest, altered and expanded repeatedly between 1787 and Madison’s death in 1836—with each change subtly reflecting the passions of the day rather than a quest for ‘original understanding.’ What emerges from this important book is a more human Madison, a more complex framing story, a new light on the struggles of the early Republic, and a deeper regard for the complexities and fascinations of American constitutional history.”—Garrett Epps, author of American Epic: Reading the U.S. Constitution

“In this eye-opening book, Bilder employs advanced research techniques to revise and correct our understanding of the written record of the Constitutional Convention. Along the way, she offers original and sometimes surprising new interpretations of many of the events and controversies that gave rise to our Constitution. Anyone who wants to understand the Constitution must take this book into account.”—Michael McConnell, co-author of The Constitution of the United States

“Bilder has written the definitive study of one of the most influential texts in American constitutional history. She demonstrates that Madison’s notes on the Philadelphia Convention were never intended to preserve an impartial transcript of debates for posterity. They were designed, rather, to serve the various purposes of their author, which changed dramatically over the decades. The text assumed its final form only when a much older Madison felt it necessary to project the ideological allegiances of Jeffersonian Republicanism backward onto the Convention. We will never read this seminal document the same way again.”—Eric Nelson, author of The Royalist Revolution

About Madison’s Notes
Introduction
I. Notes before the Constitutional Convention
1. The Genre of Legislative Diaries
2. The Practice of Working Notes

II. Learning to Keep a Conventional Diary
3. The Success of the Opening Days
4. Struggling with Speeches

IV. Abandoning the Notes
7. The Complexity of Drafting
8. The Convention’s Changing Relevance

Conclusion
The Evidence
Posted by Dan Ernst at 9:30 AM