Having been an avid reader of the Legal History Blog for many years now, I am delighted to be guest blogging this month.  Many thanks to Karen, Mitra, and Dan for the invitation!

As some LHB readers may have noticed, my first book, The Laws and Economics of Confucianism: Kinship and Property in Pre-Industrial China and England, has recently been published by Cambridge University Press.  As is customary for LHB guest bloggers, I will use my initial post to say a few things about the book.  Later posts will move beyond this to explore methodological challenges unique to the intersection of institutional and economic history, and to some of the intellectual trends that now seem to distinguish Asian legal history (particularly East Asian legal history) from American and European legal history. 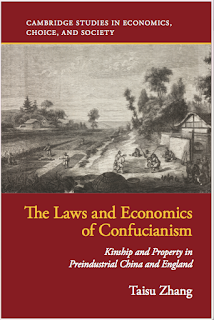 The book seeks to explain why certain Chinese property institutions in the early modern era--defined as roughly the 150-200 years before industrialization--were significantly more "poor-friendly" than functionally similar institutions in early modern England.  That is, they protected the economic and social interests of smallholders over those of wealthier landowners.  Most notably, Chinese customary laws governing mortgage transactions gave debtors (who were usually smallholders in this period) extremely strong protections against default and seizure, thereby minimizing the economic risks involved with collateralized borrowing.  In contrast, early modern English laws decisively favored the interests of the (usually wealthier) creditor, who tended to desire limited redemption rights and harsh penalties for default.  Over the long run, this institutional divergence led the English agrarian economy down a path of escalating inequality, with a small minority of landholders owning the vast majority of arable land by 1750.  Chinese agriculture, on the other hand, resisted agglomeration throughout the early modern era, remaining smallholder-heavy until collectivization in the early Communist era.

The core of the book is devoted to explaining this institution comparison.  The explanation relies on differences in social status allocation: existing evidence strongly suggests that smallholders held, on aggregate, significantly greater amounts of sociopolitical status and power in rural China than they did in rural England, and were therefore able to negotiate more favorable property institutions.  The dominance of Neo-Confucian social hierarchies in Late Imperial and Republican China, under which advanced age and generational seniority were the primary determinants of sociopolitical status, allowed many poor but senior individuals to possess status and political authority highly disproportionate to their wealth. In comparison, landed wealth was a fairly strict prerequisite for high status and authority in the far more 'individualist' society of early modern England, essentially excluding low-income individuals from secular positions of prestige and leadership. Thus, whereas smallholders had some level of representation among the local political elite in rural China, they had virtually none in England.  For the negotiation of property institutions that triggered substantial amounts of rich-poor conflict--mortgage redemption, tenancy, and so on--this could make all the difference.

The primary explanatory factor here is the seniority-based status hierarchy enshrined in Neo-Confucian ethics (hence the title "The Laws and Economics of Confucianism"): senior relatives within any kinship group were supposedly superior--socially, politically, and legally--to younger ones, parents to children, uncles to nephews.  The book shows how this led to a general norm of gerontocracy in local communities, and from there to "poor-friendly" property institutions.  It also argues in some detail that these status-distribution norms were fundamentally "cultural," in that, by at least the 17th Century, their popularity and influence was predominantly the product of widespread cultural internalization, rather than the equilibrium outcome of some material self-interest-based political economy.  For the vast majority of rural households, seniority-based social hierarchies were simply "right," so fundamental to their moral worldview that very few people dared challenge its legitimacy.

The book therefore seeks to link cultural commitments to legal change, and then to patterns of economic development.  It has many thematic connections to, but does not directly seek to explain, the early modern economic divergence between China and England that has driven an enormous amount of recent academic debate.  That literature has moved decisively against Weberian cultural paradigms in recent decades, but nonetheless remains enamored of institutional explanations for economic change.  If it continues to do so, then this book may serve as a cautionary note against rejecting cultural analysis in absolute terms.  Underlying cultural commitments can influence the shape and content of economic institutions even when those institutions themselves are not commonly thought of in moralistic or cultural terms.
Posted by Taisu Zhang at 6:32 PM