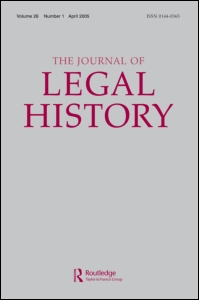 The Journal of Legal History, 39:2 (2018) is now available online.  The first article, by Donal Coffey, is “gold access”–that is, downloadable without charge.
‘The Right to Shoot Himself’: Secession in the British Commonwealth of Nations
Donal K. Coffey


The ultimate test of whether an association is voluntary or not is if you can leave it. It is difficult, at this remove, to appreciate how live an issue secession from the British commonwealth of nations was in the 1920s and 1930s. It occupied an inordinate amount of time and negotiation for a doctrine that had been ostensibly conceded in 1920. Yet, much as with the case of the appeal to the judicial committee of the privy council, once the dominions sought to take advantage of the freedom which had been guaranteed by official statements, they found a formidable amount of diplomatic pressure and legal opinion brought to bear to indicate that no such right could be officially declared. This article traces the evolution of the arguments about the right to secede in the 1930s, and examines how the right came eventually to be exercised in the case of the new commonwealth countries in the 1940s. It concludes by examining how the doctrine of secession as developed in the 1930s was abandoned in order to retain Indian membership in the commonwealth.


Judging a Judge: A Reappraisal of Lord Mansfield and Somerset’s Case
Alexander Jackman


This article presents an occasion on which moral judgement can, and should, take place. When the chief justice of the court of king’s bench – William Murray, first earl of Mansfield – was presented with the case of Somerset v Stewart in 1772, he was presented with choices that unveiled aspects of his character. By first establishing the ambiguity of the legal context and the multifarious political pressures that preceded Somerset’s case, this article identifies the extent of Lord Mansfield’s ‘room for manoeuvre’ with respect to three elements of his conduct: the delay and reluctance in making a decision, the choices regarding the substantive decision and the manner of expressing that decision. To what extent did Mansfield have freedom of action, and how did he exercise it? Are those free actions worthy of praise or condemnation? Through an essential questioning of previous historians’ assumptions and omissions, this article sharpens the strokes through which a complex portrait of Mansfield may be rendered

The Failure of the First Income Tax: A Tale of Commercial Tax Evaders?
Katherine Cousins


This article constitutes a re-examination of the financial failure of the first income tax in Britain, introduced in 1799 in order to address the rising cost of the French revolutionary wars. In accounting for this failure, the existing literature has focused largely on failings in the administration of the tax, often blaming, for example, its emphasis on local responsibility for tax collection, and its reliance on the honesty of its contributors. This article furthers these interpretations by highlighting that such issues were particularly problematic in their application to the commercial sector of society. It argues that the preferential treatment of commercial interests in the substance of the tax, on account of their privileged position in the political sphere, led to the establishment of a culture of commercial evasion. The evidence for this is examined at length, through both detailed analysis of the yield of the tax, as well as the attitudes of contemporaries evident in the literature at the time. This analysis ultimately leads to the conclusion that commercial evasion of the first tax played a pivotal, and hitherto underplayed, role in the financial underperformance of the tax.


In 1893, Prime Minister Gladstone introduced the second Irish home rule bill in parliament. The bill broke with tradition in Britain and the empire, as it included provisions from the bill of rights of the United States. Its significance was clear at the time: it was debated for nine days in the committee stage and, with one minor amendment, it remained part of the bill that passed the Commons. However, the bill was defeated in the Lords and, at least in the United Kingdom, bills of rights were dismissed as unnecessary or detrimental to sound governance until well after the second world war. This article therefore tries to understand how this early bill of rights was regarded at the time. Who suggested, or demanded, its inclusion? How did they expect it to be applied? And how did the debate reflect and influence thinking about constitutional law in Britain and the empire

Constitution-making in Asia: Decolonisation and State-building in the Aftermath of the British Empire
Donal Coffey
Posted by Dan Ernst at 12:30 AM