Thanks to the New Books Network, we realized that we failed to notify readers about this one when it came out in February: Conjugal Misconduct: Defying Marriage Law in the Twentieth-Century United States (Cambridge University Press), by William Kuby (University of Tennessee-Chattanooga). Here's a description from the Press: 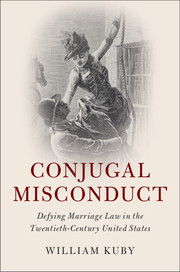 Conjugal Misconduct reveals the hidden history of controversial and legally contested marital arrangements in twentieth-century America. William Kuby examines the experiences of couples in unconventional unions and the legal and cultural backlash generated by a wide array of 'alternative' marriages. These include marriages established through personal advertisements and matchmaking bureaus, marriages that defied state eugenic regulations, hasty marriages between divorced persons, provisional and temporary unions referred to as 'trial marriages', racial intermarriages, and a host of other unions that challenged sexual and marital norms. In illuminating the tensions between those who set marriage policies and those who defied them, Kuby offers a fresh account of marriage's contested history, arguing that although marital nonconformists composed only a small minority of the population, their atypical arrangements nonetheless shifted popular understandings of marriage and consistently refashioned the legal parameters of the institution.


'The belief that marriage as an institution is in crisis is nothing new, historian William Kuby shows us in this engaging study of early twentieth-century marital nonconformists who pushed boundaries by engaging in trial marriages, serial polygamy, or interracial marriage, among other challenges to the norm. But while 'queer' couples generated a conservative backlash, Conjugal Misconduct demonstrates that even perceived challenges to the institution of marriage could serve to reinforce its power and influence in American social life.' -- Renee Romano

'Conjugal Misconduct provides the definitive study of the 'amorphousness' of the institution of marriage between the nineteenth and early twentieth centuries. Nonconforming heterosexual couples pursued every angle to evade restrictive state laws, often crossing state lines to find a more lenient marital regime. Their acts of defiance reshaped marital legitimacy, while revealing that the law itself could not constrain conjugal choices. For anyone who still clings to notions of marriage’s static, coherent past, this deftly written and deeply researched book proves that improvisation and even chaos shaped the legal history of heterosexual marriage.' -- Rebecca L. Davis