The Oxford Handbook of European Legal History, edited by Heikki Pihlajamäki, Markus D. Dubber, and Mark Godfrey, has been published. 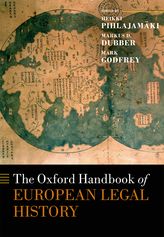 The Oxford Handbook of European Legal History charts the landscape of contemporary research and the shift from national legal histories to comparative methods, which have profoundly affected the way we understand legal transformation at the local, national, regional, European, and global level. The Handbook shows legal change in terms of continuous flow and exchange of influences, which take place within complicated combinations of cultural, political, and social networks. The present Handbook captures this revised conception of European legal history; it not only merely reflects the state of the discipline, but also aims to shape it. As the chapters of this Handbook show, ancient Roman law owed much to the Near Eastern legal orders. Later on, from the fifteenth century onwards, the major European legal orders gradually spread to all continents. Indeed, most of the globalization of law has taken place by way of European legal systems turning global.

The full table of contents is on the website, but this list of chapters in Part One suggests how interesting the whole is: