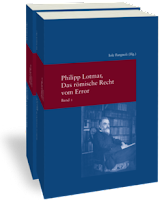 [Our friends at the Max Planck Institute for European Legal History announce the publication of a new work in the book series Studien zur europäischen Rechtsgeschichte.]

Das römische Recht vom Error (The Roman law of Error) is the title of an impressive two-volume work that brings to light a major contribution to Romanistic studies written by Philipp Lotmar (1850-1922), Professor of Civil Law at the University of Bern since 1888. Known primarily as an innovative jurist of labor law, in the course of his career, Lotmar continuously concentrated on the Roman doctrine of errors in contract law, examining a wide range of sources, which resulted in a text of about a 2.000 pages written in Sütterlin. During his lifetime, this opus magnum, which was conceived as a criticism of Karl Friedrich von Savigny's influential position, remained unknown to the public. Thanks to the editorial efforts of Iole Fargnoli, Director of the Romanistic Institute at Bern University, those parts of the manuscript Lotmar himself had prepared for publication - on cases and concepts of error - are now made available to the scientific community, almost a century after his death.
Posted by Dan Ernst at 9:30 AM