Toxic Shock :A Social History by Sharra L. Vostral, Purdue University came out with NYU Press in 2018. From the publisher: 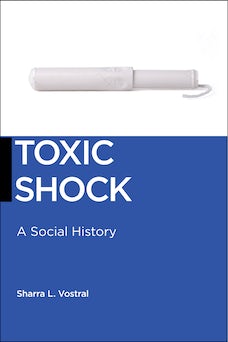 In 1978, doctors in Denver, Colorado observed several healthy children who
suddenly and mysteriously developed a serious, life-threatening illness with no visible source. Their condition, which doctors dubbed ‘toxic shock syndrome’ (TSS) was rare, but observed with increasing frequency over the next few years in young women, and was soon learned to be associated with a bacterium and the use of high-absorbency tampons that had only recently gone on the market. In 1980, the Centers for Disease Control identified Rely tampons, produced by Procter & Gamble, as having the greatest association with TSS over every other tampon, and the company withdrew them from the market. To this day, however, women are frequently warned about contracting TSS through tampon use, even though very few cases are diagnosed each year.
Historian Sharra Vostral’s Toxic Shock is the first and definitive history of TSS. Vostral shows how commercial interests negatively affected women’s health outcomes; the insufficient testing of the first super-absorbency tampon; how TSS became a ‘women’s disease,’ for which women must constantly monitor their own bodies. Further, Vostral discusses the awkward, veiled and vague ways public health officials and the media discussed the risks of contracting TSS through tampon use because of social taboos around discussing menstruation, and how this has hampered regulatory actions and health communication around TSS, tampon use, and product safety.
A study at the intersection of public health and social history, Toxic Shock brings to light the complexities behind a stigmatized and under-discussed issue in women’s reproductive health. Importantly, Vostral warns that as we move forward with more and more joint replacements, implants, and internal medical devices, we must understand the relationship of technology to bacteria and recognize that both can be active agents within the human body. In other words, unexpected consequences and risks of bacteria and technology interacting with each other remain.

"Vostral’s excellent and accessible book is the first to address Toxic Shock Syndrome. She helpfully situates it within the history of the women’s health movement, which challenged TSS through Our Bodies, Ourselves and other fora. Beautifully written, Toxic Shock melds feminist science and technology studies with careful attention to how 'health' works politically, culturally, and affectively. It is a superb addition to the women’s health and biopolitics literature."-Monica J. Casper

"This deft study of technology, disease, and consumer capitalism illuminates the centrality of shame in the history of U.S. women's health and health policy. The story of Toxic Shock Syndrome is as necessary as it is painful—a harbinger, Vostral shows, of other medical injuries to come."-Rebecca Herzig