Reid Book Award to Kostal for "Laying Down the Law"

Here's word of another prize announced at this year's meeting of the American Society for Legal History: the John Phillip Reid Book Award, for "the best monograph by a mid-career or senior scholar, published in English in any of the fields defined broadly as Anglo-American legal history," went to Rande Kostal (Western Law), for Laying Down the Law: The American Legal Revolutions in Occupied Germany and Japan (Cambridge, Mass.: Harvard University Press, 2019). Here is the citation: 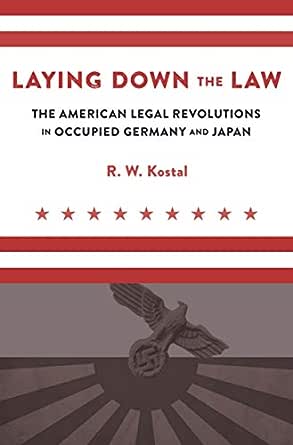 R. W. Kostal’s Laying Down the Law: The American Legal Revolutions in Occupied Germany and Japan (Harvard University Press, 2019) depicts the staggering tasks of remaking the legal landscape of defeated Axis powers after World War II. This project envisioned replacing fascist legal orders with liberal ones committed to individual rights and the rule of law. On this foundation, it was supposed, democracy could be built. Working with the self-interested jurists and bureaucrats of the defeated nations, Americans often operated, especially in the case of Japan, with only the vaguest notions of the legal systems they set out to reconstruct. Kostal contributes to the history of American foreign policy and to the comparative history of the rule of law by showing the accomplishments, hubris, and limitations of laying down the law. Perhaps the largest contribution of his well-researched and thoughtful book is to explore how and why liberal nations after World War II came to think they had the right to reshape in their own image the legal orders of conquered countries.