Wells on Holmes at the Clough Center

The Clough Center for the Study of Constitutional Democracy is hosting the webinar Author Meets Critics:  Oliver Wendell Holmes: Willing Servant of an Unknown God, by Catharine Wells, Boston College, on Monday, November 16, 2020 at 6:00PM.  The event is free and open to the public, although registration is required. Zoom link will be sent before the day of the event. 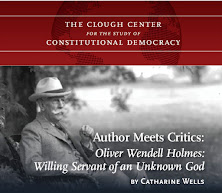 Justice Holmes was a pivotal figure in American law. On the Massachusetts Supreme Judicial Court and on the Supreme Court of the United States, he was a towering figure, writing many important opinions that are an integral part of the legal canon we study in the Twenty First Century. Unfortunately, his importance to American Law has led scholars to disregard the depth of his philosophical and spiritual views. This book explores these views and describes the intellectual context that formed them. The result is a fuller picture of the man and of the possibility he poses of leading a meaningful life in the profession of law.

In addition to Professor Wells, panelists include:

And don’t forget Clough Center’s noontime (EST) webinar this Friday: In Congress We Trust? Enforcing Voting Rights from the Founding to the Jim Crow Era, with Franita Tolson.