Studies in American Political Development 35:2 (October 2021) has been published: 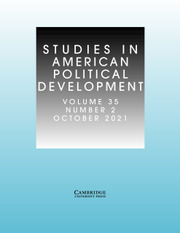