Today is the publication date for Laura Kalman’s FDR's Gambit: The Court Packing Fight and the Rise of Legal Liberalism (Oxford University Press), a meticulously researched and engagingly written study that's bound to alter the role this iconic event plays in contemporary debates on reform of the U.S. Supreme Court 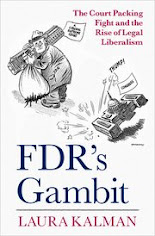 In the last past few years, liberals concerned about the prospect of long-term conservative dominance of the federal courts have revived an idea that famously crashed and burned in the 1930s: court packing. Not surprisingly, today's court packing advocates have run into a wall of opposition, with most citing the 1930s episode as one FDR's greatest failures. In early 1937, Roosevelt-fresh off a landslide victory-stunned the country when he proposed a plan to expand the size of the court by up to six justices. Today, that scheme is generally seen as an act of hubris-an instance where FDR failed to read Congress and the public properly.

In FDR's Gambit, the eminent legal historian Laura Kalman challenges the conventional wisdom by telling the story as it unfolded, without the distortions of hindsight. Indeed, while scholars have portrayed the Court Bill as the ill-fated brainchild of a hubristic President made overbold by victory, Kalman argues to the contrary that acumen, not arrogance, accounted for Roosevelt's actions. Far from erring tragically from the beginning, FDR came very close to getting additional justices, and the Court itself changed course. As Kalman shows, the episode suggests that proposing a change in the Court might give the justices reason to consider whether their present course is endangering the institution and its vital role in a liberal democracy.

Based on extensive archival research, FDR's Gambit offers a novel perspective on the long-term effects of court packing's failure, as a legacy that remains with us today. Whether or not it is the right remedy for today's troubles, Kalman argues that court packing does not deserve to be recalled as one fated for failure in 1937.

"This boldly revisionist history of FDR's effort to 'pack' the Supreme Court could not be more timely or relevant. Laura Kalman, one of the country's most important legal historians, offers a spellbinding exploration of the realm where law and politics met in 1937-and where, with the stakes as high as ever, they still meet today." -- Linda Greenhouse, Yale Law School

"By writing from the perspectives of the players, especially FDR, Laura Kalman casts much new light on an episode-the Court-packing plan-that many of us falsely believe we know all about. She writes vividly and leads readers to want to turn pages to find out what comes next. A wonderful read on an important topic." -- Sanford Levinson, author of Framed: America's 51 Constitutions and the Crisis of Governance

"One of the nation's preeminent legal historians, Laura Kalman provides an insightful and entertaining look at the New Deal constitutional crisis. Kalman shines a fresh light on the public and legislative reaction to Franklin Roosevelt's 'court-packing plan' and explains why Roosevelt was unable to persuade a Democratically-controlled Congress to increase the number of Supreme Court justices. FDR's Gambit is a must-read for anyone interested in the story behind this bold political move at a pivotal moment in the history of the Court and of the nation." -- Brad Snyder, author of Democratic Justice: Felix Frankfurter, the Supreme Court, and the Making of the Liberal Establishment

"With Supreme Court reform again bobbing up and down at the surface of political contention, Laura Kalman's meticulous examination of the political history of FDR's Court-packing plan cautions against any simple version of what happened. Moving almost day by day, Kalman shows how complicated the Court-packing plan's course was (like that of any piece of significant legislation). Was the plan a blunder by FDR? Maybe yes, maybe no. Was it doomed from the start? Perhaps, but perhaps not. Did politically savvy interventions by the Court and its Chief Justice derail the proposal? A bit, but perhaps not too much. Kalman's careful account lets readers come to their own conclusions about the plan's fate-and about the meaning of the episode for our own times." -- Mark Tushnet, William Nelson Cromwell Professor of Law emeritus, Harvard Law School

"Laura Kalman's revisionist account of the Court-packing crisis of 1937 delves more widely and deeply into the relevant archival materials and contemporary journalistic coverage than has any previous treatment. Her overview of the vast body of scholarship concerning constitutional development in the New Deal period is erudite and discerning. Even those who may differ with her normative perspective or with some of her interpretive conclusions will find much to learn from and admire in this absorbing and illuminating narrative." -- Barry Cushman, John P. Murphy Foundation Professor of Law, University of Notre Dame

"Laura Kalman has been a longtime participant in and observer of the ongoing debate about the political and legal significance of the Roosevelt Administration's introduction of a bill to expand the size of the Supreme Court in early 1937. This book is her most recent and extensive contribution to the debate. It demonstrates Kalman's great talent for archival research and exceptional command of scholarly literatures. Students of the New Deal, twentieth century American politics, and twentieth-century constitutional history are in debt to Kalman for her illuminating intervention into a scholarly issue of enduring significance." -- G. Edward White, David and Mary Harrison Distinguished Professor, University of Virginia School of Law