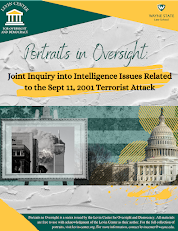 The Levin Center for Oversight and Democracy at the Wayne State University School of Law has announced the publication of Joint Inquiry into Intelligence Issues Related to the September 11, 2001 Terrorist Attack, which appears in Portraits in Oversight, a series of "short profiles of historic Congressional oversight investigations that have shaped our understanding of the American story. " Here's the complete list:

2: Joint Committee on the Conduct of the Civil War

6: Harry Truman and the Investigation of Waste, Fraud, and Abuse in World War II

10: Frank Church and the Church Committee

15: Congress and the Enron Scandal