Law School Reform, Notable Books in Law and History, and More: This Week in the Book Pages

Over at the Daily Beast, R.B. Bernstein reviews Bernard Bailyn's The Barbarous Years: The Peopling of British North America: The Conflict of Civilizations, 1600-1675 (Knopf).  Bernstein writes:


The Barbarous Years, the capstone of his extraordinary career, returns Bailyn and his readers to the 17th century, the period to which he devoted his earliest scholarly work, and reveals a time of torment, want, and what the poet John Donne called “a flood, a flood of blood.”

You can read the rest of the review, here. 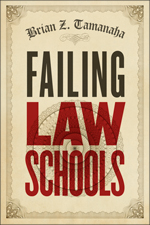 [A]fter a century of mainly positive attention, law schools are now making news with...the existential crisis they face.   Brian Tamanaha’s book is the best analysis yet of this crisis. American law schools are, as the title of his book says, simply “failing.” They offer only a one-size-fits-all law school education that does not teach many law students what they should learn and is also incredibly expensive. If we are to save one of our cherished American institutions, we must take Tamanaha’s concerns to heart.

On the Washington Post's list of 50 Notable Works of Nonfiction are several books on law and history including:

David Scheffer, All the Missing Souls: A Personal History of the War Crimes Tribunals (Princeton)

Jeffrey Toobin, The Oath: The Obama White House and the Supreme Court (Doubleday)

Kenneth W. Mack, Representing the Race: The Creation of the Civil Rights Lawyer (Harvard)
Posted by Clara Altman at 5:00 AM