John G. Basker’s edition of the Library of America volume American Antislavery WritingsColonial Beginnings to Emancipation is just out.  Here is LOA's description: 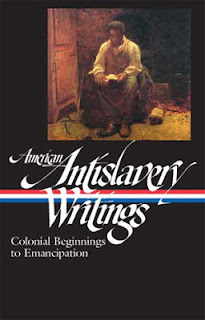 Distinguished by passionate eloquence, moral fervor, and joyful solidarity, and, extraordinarily for its time, embracing writers male and female, black and white, antislavery literature encompassed a dazzling variety of genres: autobiography, fiction, children’s literature, poetry, oratory, and song. In telling one of the most important stories in American history, American Antislavery Writings offers a survey of unprecedented range and depth, reclaiming many forgotten voices and casting the works of some of the greatest American writers—Franklin, Emerson, Thoreau, Alcott, Melville, Dickinson—in a new light.

The anthology reaches back to America’s colonial beginnings, when the first stirrings of the movement that would change the course of a nation emerged from the scrupulous piety of men like George Keith in Pennsylvania and Samuel Sewall in Massachusetts. Religious arguments against the sin of slavery were soon augmented by Enlightenment ideas about universal human equality and a growing awareness that the emerging American economy was dependent on an immoral labor system. With the American Revolution, Phillis Wheatley and Olaudah Equiano put forward the first published African American indictments of slavery, and slave-owners such as Arthur Lee and George Washington grappled with their own involvement in an inhuman institution.

In the nineteenth century an astonishing proliferation of abolitionist writing was disseminated through periodicals such as William Lloyd Garrison’s Liberator, as well as in books, pamphlets, public lectures, and even hymnals and children’s readers. The persuasive force of this literature achieved perhaps its fullest expression in the writings of Frederick Douglass, William Wells Brown, and Harriet Beecher Stowe, each of whom is generously represented here. As the crisis over slavery intensified, crucial events—from the passage of the 1850 Fugitive Slave Act to John Brown’s raid on Harpers Ferry—elicited stirring responses that propelled the country closer toward war. Culminating with the writings that solidified the Civil War’s transformation into a crusade against the nation’s original sin of slavery, especially Lincoln’s Emancipation Proclamation and his magnificent Second Inaugural, here is the inspiring moral and political struggle whose evolution parallels the story of America itself.

Basker blogs on it here; the table of contents is here.
Posted by Dan Ernst at 11:30 AM