The History of Danish Law

You heard it here first. The Next Big Thing will be Danish Legal History.  An inexpensively priced entree is The History of Danish Law: Selected Articles and Bibliography, edited by Ditlev Tamm, who is Professor of the History of Law at the University of Copenhagen.  In the preface, Tamm writes: 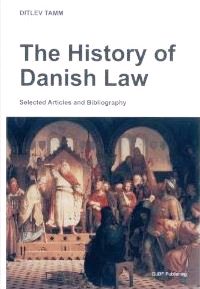 A complete history of Danish law in English is not available.  However many topics from Danish legal history have in later times been exposed in English.  This book was originally meant as a bibliography to help finding out what is written by mostly Danish Legal historians in other European languages on Danish law.  I found it useful to combine such a bibliography with a series of my articles on selected topics of the History of Danish law from the middle ages till our times.

Here are the contents:

The Danes and Their Legal Heritage

How Nordic are the Old Nordic Laws?

Crime and Courts in Early Modern Denmark and Norway

The Danish Code of 1683: An Early European Code in an International Context

The Danish Debate on Montesquieu: Holberg, Kofod Ancher, Stampe, Sneedorf, and Schytte
Anders Sandoe Orsted and the Influence from the Civil Law upon Danish Private Law at the Beginning of the 19th Century

The Danish Constitution of 5 June 1849: Genesis and Impact

Professors and Politics in the 19th Century

Harmonization of Nordic Law in the 19th and 20th Centuries

By Way of Conclusion: From European to a Global Approach?

Danish Legal History: Selected Bibliography of Books and Articles in English, German, French, Italian, and Spanish.
Posted by Dan Ernst at 3:30 AM

Just a note to add: the book is very well written, making the chapters attractive for assignment in legal history courses. Legal historians will also find it to be a helpful resource for bringing comparative perspectives to their classes. The author has occasionally attended the ASLH, so he is also a resource to keep in mind for conference panels.