Summer reading for new (and not so new) faculty: Mirror to America: The Autobiography of John Hope Franklin

The New York Times has its summer reading recommendations in the book review section this Sunday. But my choice, a must read for any academic, and for anyone interested in understanding 20th century America, is Mirror to America: The Autobiography of John Hope Franklin (Farrar, Straus and Giroux, 2005). A powerful story, beautifully written and out in paperback, Franklin's personal narrative will absorb you through any transaltantic flight. "Summer reading" may be more for enjoyment than enlightenment, but from this book you will get both. 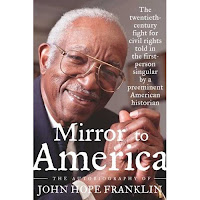 For academics, the book provides a rare window on the way race operates within the academy, and affects a life. Franklin was often in the role of being a "first," or a token, and confronted many slights. One of the most celebrated stories of a "first" is that of baseball player Jackie Robinson, who would take insults on the field silently. Not Franklin, as he recounts in this book. He would often get angry, and would call attention to an exclusion or insult, rather than let it pass by. And through it all, he succeeded. It is, in part, a story of perseverance against the odds, a helpful life lesson for many academics.

"JOHN HOPE FRANKLIN is among a handful of scholars who have changed the way Americans view their past," David Oshinsky wrote in a New York Times review in November 2005.

It wasn't so long ago that mainstream histories of the United States ignored the experience of minorities or employed the sort of stereotypes that most readers today would find offensive. An African-American, raised and educated in an era of stifling race prejudice and legal segregation, Franklin, now 90 years old, has spent his career exposing the bigotry that once dominated American intellectual life and continues to infect society at large. His scholarship is his weapon.

"Mirror to America" is a riveting and bitterly candid memoir. Born in an all-black Oklahoma town in 1915, Franklin can remember his mother, a teacher, riding a horse to work "with a pistol in her saddlebag to protect herself from wolves or some vagabond who might attempt to molest her." In 1921 his father, an attorney, moved to Tulsa to open a law practice and buy a home for the family. A few months later, the black section of that city was demolished in one of the bloodiest race riots in American history. His father lost everything, postponing the family move for four years. In Tulsa, Franklin encountered a seething racism that kept the black community in a state of perpetual unease. There "was never a moment in any contact I had with white people," he writes about this time, "that I was not reminded that society as a whole had sentenced me to abject humiliation for the sole reason that I was not white."

Living in a world restricted by laws defining race, as well as creating obstacles, disadvantages, and even superstitions regarding race, challenged my capacities for survival. For ninety years I have witnessed countless men and women likewise meet this challenge. Some bested it; some did not; many had to settle for any accommodation they could. I became a student and eventually a scholar. And it was armed with the tools of scholarship that I strove to dismantle those laws, level those obstacles and disadvantages, and replace superstitions with humane dignity. Along with much else, the habits of scholarship granted me something many of my similarly striving contemporaries did not have. I knew, or should say know, what we are up against....

Born in 1915, I grew up in a racial climate that was stifling to my senses and damaging to my emotional health and social well-being....

This climate touched me at every stage of my life. I was forcibly removed from a train at the age of six for having accidentally taken a seat in the “white people’s coach.” I was the unhappy victim, also at age six, of a race riot that kept the family divided for more than four years. I endured the very strict segregation laws and practices in Tulsa, Oklahoma. I was rejected as a guide through busy downtown Tulsa traffic by a blind white woman when she discovered that the twelve-year-old at her side was black. I underwent the harrowing experience as a sixteen-year-old college freshman of being denounced in the most insulting terms for having the temerity to suggest to a white ticket seller a convenient way to make change. More harrowing yet was the crowd of rural white men who confronted and then nominated me as a possible Mississippi lynching victim when I was nineteen. I was refused service while on a date as a Harvard University graduate student at age twenty-one. Racism in the navy turned my effort to volunteer during World War II into a demeaning embarrassment, such that at a time when the United States was ostensibly fighting for the Four Freedoms I struggled to evade the draft. I was called a “Harvard nigger” at age forty. At age forty-five, because of race, New York banks denied me a loan to purchase a home. At age sixty I was ordered to serve as a porter for a white person in a New York hotel, at age eighty to hang up a white guest’s coat at a Washington club where I was not an employee but a member.

And from the book description:

[Franklin] managed to receive a Ph.D. from Harvard, become the first black historian to assume a full-professorship at a white institution, Brooklyn College, be appointed chair of the University of Chicago's history department and, later, John B. Duke Professor at Duke University. He has reshaped the way African American history is understood and taught and become one of the world's most celebrated historians, garnering over 130 honorary degrees. But Franklin's participation was much more fundamental than that. From his effort in 1934 to hand President Franklin Roosevelt a petition calling for action in response to the Cordie Cheek lynching, to his 1997 appointment by President Clinton to head the President's Initiative on Race, and continuing to the present, Franklin has influenced with determination and dignity the nation's racial conscience. Whether aiding Thurgood Marshall's preparation for arguing Brown v. Board in 1954, marching to Montgomery, Alabama, in 1965, or testifying against Robert Bork's nomination to the Supreme Court in 1987, Franklin has pushed the national conversation on race towards humanity and equality, a life-long effort that earned him the Presidential Medal of Freedom, the nation's highest civilian honor, in 1995. Intimate, at times revelatory, Mirror to America chronicles Franklin's life and this nation's racial transformation in the 20th century, and is a powerful reminder of the extent to which the problem of America remains the problem of color.

You can listen to Franklin discuss the book on NPR here. A webcast at the Charles Hamilton Houston Institute of Race and Justice is here.
Posted by Mary L. Dudziak at 11:49 AM