One hundred years ago today, Thurgood Marshall was born. In our own vastly different legal environment, it is hard to imagine what a milestone it was when Marshall became the nation’s first African American Supreme Court Justice in 1967, when he first argued before the Court as the first African American Solicitor General in 1965, when the man known as "Mr. Civil Rights" was confirmed by the Senate for a seat on the Second Circuit Court of Appeals after a year-long confirmation stalemate in 1962, or when his most important case as a civil rights lawyer, Brown v. Board of Education, was decided by the Court in 1954.
My new book, Exporting American Dreams: Thurgood Marshall’s Afric 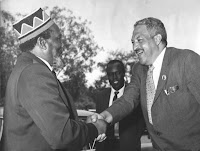 an Journey focuses on one part of this man’s life, but one of my objectives in writing it was to reintroduce Marshall to a public that remembers him only as an aging Supreme Court dissenter. The book sets Marshall’s work in Africa in the context of his American civil rights work in the 1960s and takes the reader along with Marshall not only to constitutional negotiations leading to independence for Kenya, but also to a civil rights strategy meeting in Atlanta, and to the Louisiana sit-ins in 1960 leading to one of the cases that captured Marshall’s attention in his last months at the NAACP Legal Defense Fund.
The narrative strategy of the book is unusual. Each chapter is transnational. The focus shifts from the American civil rights context to Marshall’s work in Kenya (about which I’ve posted here and here). And it turns at times to the Kenyans Marshall worked most closely with, including Tom Mboya, a dynamic young Kenyan leader once seen as the West’s best hope for Africa, but assassinated in 1969.By crossing borders, the book is part of historians’ efforts to examine American history on a global terrain. It engages an issue explored in recent works by James Campbell, Kevin Gaines and Saidiya Hartman: the way race and national identity are configured in African/American encounters. As a transnational legal biography, the book integrates foreign and domestic narratives, treating an international sojourn not as a vacation from Marshall’s "real life," but as another arena in which his ideas about law and social change were both framed and ultimately challenged. His belief that legal change was an essential element of equal citizenship seemed old-fashioned to younger American 1960s activists, but it was borne out of his life experience and was reinforced by his engagement in legal negotiations aimed at liberating Africans.

Thurgood Marshall has long been a staple in American history books, though sometimes only in passing reference to his American milestones. For his centennial, we should remember as well that his work – at home and abroad – made a mark on the world.
Cross-posted from Balkinization.
Posted by Mary L. Dudziak at 12:01 AM