Reviewed: books on the U.S. in the Middle East, Taking on Standard Oil, the 1917 St. Louis Race Riots and more

Diplomatic historian Fredrik Logevall takes up A CHOICE OF ENEMIES: America Confronts the Middle East (PublicAffairs) by Lawrence Freedman in the Washington Post today, finding it "a richly detailed and carefully argued study of the evolution of U.S. policy in this part of the world, with particular emphasis on the last three decades."

What the past three decades in the Middle East show, Freedman sensibly concludes, is that America's ability to effect change is ultimately limited. The peoples there, even those with whom the United States has been ostensibly allied, have their own agendas that don't necessarily coincide with Washington's. Some problems in the region, moreover, are so complex and deep-rooted as to defy solution; they can only be managed or endured.

This puts a premium on diplomacy, which to Freedman's mind is something of a lost art among Americans.

Read the rest here.
Patrick J. Walsh reviews Taking On the Trust: The Epic Battle of Ida Tarbell and John D. Rockefeller- How an Investigative Journalist Brought Down Standard Oil (Norton) by Steve Weinberg for the Boston Globe, finding it well written and researched. The book illuminates the role of a female journalist in an important episode in progressive-era U.S. legal history. 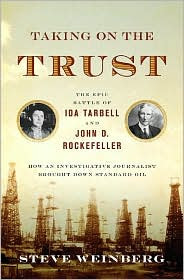 sing the misdeeds of Standard Oil. Tarbell experienced these firsthand; her father had been an oil refiner in western Pennsylvania. Her research and attention to detail set the journalistic standard for what came to be known as investigative reporting. The two-year exposé of Standard Oil caused a public sensation among Americans appalled by the company's lack of fair play. Tarbell portrayed the company as a dread power, cruel, omniscient, always ready to spring, and charged Rockefeller with "commercial Machiavellism."

Under fire, Rockefeller maintained a strict public silence. Privately, he retaliated by calling his nemesis Miss Tar Barrel. McClure's published its series in the book "The History of the Standard Oil Company." A bestseller, it spawned further legal investigations, leading to a landmark Supreme Court decision that dissolved the Standard Oil trust in 1911. 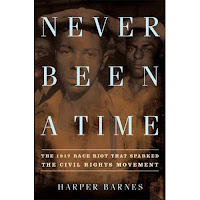 es, Never Been a Time: The 1917 Race Riot That Sparked the Civil Rights Movement (Walker & Co.) is reviewed by Scott Martelle for the Los Angeles Times. The book "centers on a race riot in East St. Louis, Ill., on July 2 and 3, 1917, that killed at least 48 men, women and children, 39 of them black, and destroyed a large swath of mostly black neighborhoods across the Mississippi River from St. Louis. It was the bloodiest race riot in U.S. history, until the 1992 Los Angeles riots. The details of how most of those people came to be in East St. Louis and how they died offer a sobering look at white-black history in this country and how it informs race relations today. "

Although Barnes does "a sterling job" in illuminating this history, he "doesn't quite make the case that this bloody episode began the civil rights movement."