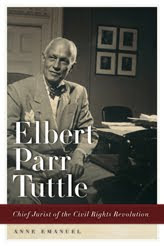 The preface to the first full biography of Elbert Tuttle, the judge who led the historic Fifth Circuit – the federal court with jurisdiction over most of the deep south – through the most tumultuous years of the Civil Rights Revolution. Tuttle had co-founded a prestigious law firm; litigated two major constitutional cases, Herndon v. Lowry (1937) and Johnson v. Zerbst (1938); earned a Purple Heart in the battle for Okinawa; and led the effort to build a viable Republican Party in Georgia – all before he joined the Fifth Circuit in 1954. When he became Chief Judge in 1960, six years had passed since Brown v. Board of Education had been decided and almost nothing had changed. Jim Crow segregation, our American apartheid, remained firmly in place. His swift, decisive rulings and his unprecedented use of the All Writs Act effectively neutralized the delaying tactics of diehard segregationalists, from school board members and voter registrars to obstructionist judges and governors, across the South.

Dennis J. Hutchinson, William Rainey Harper Professor in the College and Senior Lecturer in Law, University of Chicago, says of the book:


The role of federal judges in the civil rights movement has been studied thoroughly, but Anne Emanuel has a larger story to tell about the man who served as chief judge of the largest appeals court in the South during the heyday of court-ordered racial desegregation. Elbert Tuttle, raised in Hawaii and educated in New York, led a remarkable life long before being appointed to the bench. He was active working to promote civil liberties during the 1930s, went to war in middle age and became a decorated combat veteran, and helped to secure Dwight Eisenhower’s nomination for President during the bitter 1952 Republican Convention. All the while he was a quiet, unassuming father of two and co-partner in one of the most successful law firms in the region. Emanuel knew the judge, has mined his working papers, and writes with a sure feel for this modest man who cast such a large shadow over his adopted South.


Anne Emanuel admirably describes the career—in war, politics, and law—of a judge who was at the center of enforcing civil rights law in the 1960s. Full of interesting detail, Elbert Parr Tuttle tells us much about how one person’s life can shape the law.