Daniel A. Farber, University of California, Berkeley School of Law, has posted The Thirty Years War Over Federal Regulation, a review of Thomas A. McGarity’s Freedom to Harm: The Lasting Legacy of the Laissez Faire Revival (Yale University Press, 2013).  Here is the abstract: 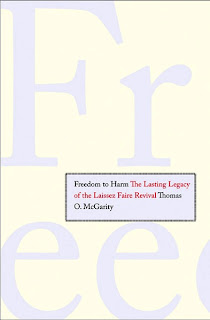 Using the evidence Tom McGarity assembles in his recent book 'Freedom to Harm', this paper examines regulatory history during the thirty-plus years since Reagan became president. Although the available evidence presented is necessarily incomplete, it suggests strongly that the opponents of regulation have had only mixed success. Legislative efforts to roll back the regulatory state have given rise to pitched political battles, but in the end have not infrequently ended in modest expansions of agency authority. Opponents of regulation have had more luck in the rule-making process, where they have succeeded in delaying or killing regulatory efforts or in weakening the final regulations. They have successfully joined advocates of “smarter regulation” in some of these efforts. Yet, in the end, the body of federal regulation has continued to grow almost unabated. The biggest success of the opponents of regulation has come through budget cuts and policy changes that have weakened enforcement, but even there, other factors may have helped soften the impact on the beneficiaries of regulation. Altogether, despite the frustrations of environmentalists, this has also been a dismal period for opponents of the regulatory state.