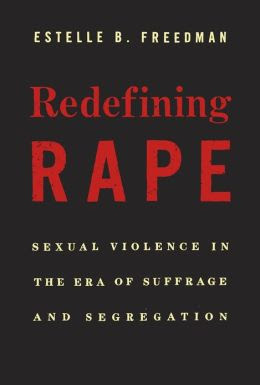 Rape has never had a universally accepted definition, and the uproar over "legitimate rape" during the 2012 U.S. elections confirms that it remains a word in flux. Redefining Rape tells the story of the forces that have shaped the meaning of sexual violence in the United States, through the experiences of accusers, assailants, and advocates for change. In this ambitious new history, Estelle Freedman demonstrates that our definition of rape has depended heavily on dynamics of political power and social privilege.

The long-dominant view of rape in America envisioned a brutal attack on a chaste white woman by a male stranger, usually an African American. From the early nineteenth century, advocates for women's rights and racial justice challenged this narrow definition and the sexual and political power of white men that it sustained. Between the 1870s and the 1930s, at the height of racial segregation and lynching, and amid the campaign for woman suffrage, women's rights supporters and African American activists tried to expand understandings of rape in order to gain legal protection from coercive sexual relations, assaults by white men on black women, street harassment, and the sexual abuse of children. By redefining rape, they sought to redraw the very boundaries of citizenship.

Freedman narrates the victories, defeats, and limitations of these and other reform efforts. The modern civil rights and feminist movements, she points out, continue to grapple with both the insights and the dilemmas of these first campaigns to redefine rape in American law and culture.


A selection of blurbs:


“Redefining Rape is a brilliant, vitally important, and richly textured history of the shifting definitions of rape in America, and of the relentless challenges that black and white women waged to protect their humanity and to own their bodies. Freedman perceptively traces the self-defense mechanisms women developed in order to sustain a culture of activism and resistance.”—Darlene Clark Hine

“Freedman eloquently demonstrates that changing understandings of who is likely to rape, and who is likely to be the victim, have been at the core of the troubled histories of racial and gender injustice. Read this remarkably important book to understand the enduring sexual politics of our own time.”—Linda K. Kerber


“This is an unsparing and revelatory study. As she tracks evolving views of what constituted rape and who was to blame, Freedman illuminates American inequalities—of class, age, gender, and especially race—from wholly unexpected angles. A must for anyone concerned with equity in the American polity.”—Nancy F. Cott

The book's website includes links to additional content, including reviews and interviews.
Posted by Karen Tani at 7:30 AM