Novick on Holmes and the New Originalists

Sheldon Novick, Vermont Law School, has posted a new preface, entitled Honorable Justice at Twenty-Five, to his biography Honorable Justice: The Life of Oliver Wendell Holmes (1989).  Here is the abstract: 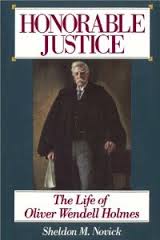 There have been three print editions since 1989 of Honorable Justice: The Life of Oliver Wendell Holmes by Sheldon Novick: the first hardcover edition from Little Brown, a trade paperback edition from Dell Publishing, and a collectible leather-bound edition from Legal Classics Library. The text of successive print editions was unchanged. A new ebook edition from Plunkett Lake Press has been revised and corrected, redesigned for digital readers, and a new preface has been added bringing the book up to date. This article includes the text of the preface.

In summary: Interest in Justice Holmes continues, especially with regard to his First Amendment jurisprudence. He has also become a major figure in debates over originalism. As portrayed in this biography, Holmes was a champion of the common law, particularly as common-law privileges were the basis of the Bill of Rights. He viewed the Supreme Court as a common-law court bound by its precedents, and engaged in the process of defining the principles "transplanted from foreign soil" found in those precedents The New Originalists argue that the original understanding of the text of the Constitution is authoritative in cases arising under the Constitution, and that fidelity to the original understanding trumps any precedents that depart from it. Holmes, the champion of an evolving common law, accordingly has become the target of originalist criticism, criticism that the author of this preface claims he stoutly withstands.