Livingston's "Fascists and Jews of Italy"

Out recently from Cambridge University Press in the ASLH-sponsored book series, Studies in Legal History, is The Fascists and the Jews of Italy: Mussolini's Race Laws, 1938–1943, by Michael A. Livingston, Rutgers-Camden School of Law.  Here is the press’s description: 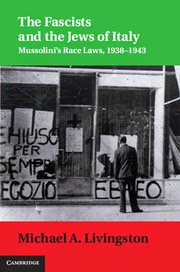 From 1938 until 1943 – before the German occupation and accompanying Holocaust – Fascist Italy drafted and enforced a comprehensive set of anti-Semitic laws. Notwithstanding later rationalizations, the laws were enforced and administered with a high degree of severity and resulted in serious, and in some cases permanent, damage to the Italian Jewish community. Written from the perspective of an American legal scholar, this book constitutes the first truly comprehensive survey of the Race Laws in the English language. Based on an exhaustive review of Italian legal, administrative, and judicial sources, together with archives of the Italian Jewish community, Professor Michael A. Livingston demonstrates the zeal but also the occasional ambivalence and contradictions with which the Race Laws were applied and assimilated by the Italian legal order and ordinary citizens. Although frequently depressing, the history of the Race Laws also involves numerous examples of personal courage and idealism, and provides a useful and timely study of what happens when otherwise decent people are confronted with an evil and unjust legal order.