Book Talk at the BPL: Dayton on "Robert Love's Warnings" 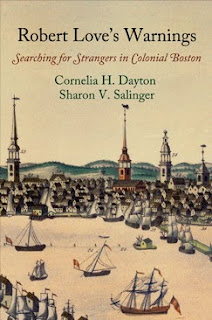 On Wednesday, May 6, 2015, 6 – 7:30 p.m in the Abbey Room of the Boston Public Library at 700 Boylston Street, Cornelia Hughes Dayton, University of Connecticut, will talk on Robert Love’s Warnings: Searching for Strangers in Colonial Boston, which she wrote with Sharon V. Salinger, University of California-Irvine.  The book won this year’s Merle Curti Award in Social History of the Organization of American Historians.


In colonial America, warning out was a way for a community to regulate those to whom it would extend welfare. Between 1765 and 1774, Robert Love warned four thousand itinerants, including migrant workers, demobilized British soldiers, and other newcomers. Cornelia Hughes Dayton will discuss why so many people were on the move throughout the British Atlantic and why they came to Boston. She is Associate Professor of History at the University of Connecticut.