[Longtime LHB readers will recall that the exam in my annual survey of American legal history includes a biographical essay.  Here is this year's.] 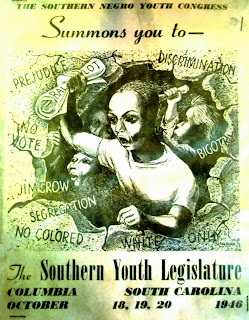 Louis Rothschild Mehlinger (1882-1987) was born along the shores of the Mississippi River to Ferdinand Mehlinger, a German Jew who had emigrated to New Orleans in 1865, and the former Catherine Hayes, who had been born a slave in 1863.  He grew up in rural Mississippi, where his father was a postmaster and merchant.  Louis was sent off to a historically black college in Jackson, Mississippi, where the instruction was vocational.  One day, Booker T. Washington visited and Mehlinger was among the students assigned to look after the great man.  “I never will forget,” he later said, “I got to shine the dear gentleman’s shoes.”  Looking back, he thought the educator’s focus on vocational training was right “under the circumstances in which Booker Washington found himself.”

Upon graduating he briefly taught carpentry in Florida, but in January 1907, during Theodore Roosevelt’s presidency, he arrived in Washington, DC, to take a job as clerk in the Treasury Department.  He boarded in the same house with Carter Woodson and would serve as secretary of the historian’s Association for the Study of Afro-American Life and History.  He enrolled in Howard University’s night dental school, but it closed before he could get his degree.  By studying shorthand, typing, bookkeeping, he qualified for a stenographer job at Treasury.  In 1916 he entered Howard’s night law school but his studies were interrupted by the United States’ entry into World War I.  After a stint in a black officer’s training school, he became a captain in an infantry division that served in France.

After the war, Mehlinger returned to Treasury and recommenced his nighttime legal studies at Howard.  He graduated magna cum laude in 1921, soon after the start of Warren G. Harding’s presidential administration.  Solo practice was unpromising, as “most black families with any means” wanted a white lawyer.  Fortunately, the Department of Justice’s only black lawyer, a member of the Republican National Committee from Mississippi, had Mehlinger appointed his stenographer.  Because his politically connected boss “ran around a lot,” all the law work of the office fell to him.  “Pretty soon,” he recalled, “I was appointed assistant attorney and assigned to argue cases in the Court of Claims,” a juryless court that heard monetary claims against the federal government.

Some members of the government were offended when they realized that the Department of Justice had sent a black lawyer to discuss a case with them.  When Mehlinger traveled in the South to investigate a claim, he routinely left the day before the returned trip he had booked, fearful that if he left as scheduled “Ku Klux Klan elements” might take him off the train once in some rural area.  His caution was understandable: in 1925, white Mississippians murdered his brother and drove his father from the state.  Despite such handicaps, Mehlinger became so good at his job that even FDR's patronage-starved Democrats decided they had to retain him–a Republican–when they came into office in 1933.

Mehlinger had subscribed to the NAACP’s journal as early as 1915, when he wished its editor W.E.B. Du Bois and the NAACP itself “smooth seas and prosperous gales on its great voyage for manhood rights.”  (Mehlinger later called Du Bois “the most brilliant man I ever knew.”)  In 1919, he testified against racially segregated passenger cars at a congressional hearing over the return of railroads to private hands after their wartime nationalization.  With Charles Hamilton Houston and five others, Mehlinger co-founded a black lawyer’s group, the Washington Bar Association, in 1925.  But he also thought that “Houston had the Harvard stamp on him.”  Unlike Houston, Mehlinger believed one could study law successfully at night and co-founded a night law school that produced 600 graduates over fifteen years starting in the 1930s.

As perhaps befits a fellow who delivered patriotic Flag Day speeches to schoolchildren, in December 1941 Mehlinger offered his services to the Secretary of War “in whatever field of endeavor they may be used in defense of my country.”  He also tried to persuade Brigadier General Benjamin O. Davis to help him be called to active duty.  (Davis told him that "he would be of more service, due to his age and so forth, to the government by remaining in his present assignment.”) Mehlinger was active in his church (where he was a deacon), the American Legion, the Elks, and his college fraternity.  In these groups he always argued against those who counseled collaborating with Communists.  “I have always maintained that all the ills eventually could be adjusted,” he later explained.  One his superiors at DOJ agreed.  Although Mehlinger concerned himself with the welfare of “his own people,” Francis Shea recalled, “he was moderate and seasoned in his views of how to push forward the welfare of the Negroes.”

Mehlinger refused to join the National Negro Congress but he did join the National Lawyers Guild in 1946 because he understood from Judge James A. Cobb that it “had received a clearance”–apparently a reference to the decision not to place the Guild on the Attorney General’s List of Subversive Organizations.  Although placed on the Guild’s Civil Rights Committee, he attended no more than three Guild meetings.

You can imagine Mehlinger’s shock and surprise, then, when, in September 1948, he was notified to appear before the Department of Justice’s Loyalty Review Board, created by executive order by President Harry S. Truman, to show why he should not be removed from his position for disloyalty.  The only basis offered was his “sympathetic association with the Southern Negro Youth Congress,” a group long under surveillance by the Federal Bureau of Investigation.  Mehlinger had agreed to have his name listed as a sponsor of the group’s national meeting after receiving a circular listing one of his fraternity brothers, Du Bois, and other African American leaders.  “Being a Negro myself and having suffered the indignities of Jim Crowism,” he explained at his hearing, “naturally I was in sympathy.”  He only learned that the group was considered subversive when notified of his charges.

When presented with the pamphlet of the Southern National Youth Congress that listed Mehlinger as a sponsor, the lawyer was repulsed.  The figures on it, he said at his hearing in October 1948, reminded him of a “passage from Dante’s Inferno. . . .  I would have suffered my right hand to be cut off before I put my name” to it.  Many witnesses–white and black–testified to his loyalty and none to his disloyalty.  One former Assistant Attorney General testified that he was “dumbfounded “ to hear of the charges.  Another DOJ lawyer called Mehlinger “one of the most loyal people that I have ever known” and “one of the most faithful government servants that I have ever come into contact with.”  Although Mehlinger kept his position, his file was not closed until after his retirement in 1952.

At his loyalty hearing, Mehlinger ventured, “I have achieved as well as any man who started as low as I was.”  The Washington Post reporter who caught up with him on his hundredth birthday found that he still had a few court-appointed clients.  Asked his philosophy of life, he quoted Micah: “What does the Lord require of the old man?  But to love mercy, do justly and walk humbly with thy God.”  He died a few weeks short of his 105th birthday.

[The principal sources for this essay are digitized newspapers and the Oversize Personnel Security Investigation Case Files (inventory A1, entry 2, box 1303) of the Records of the Office of Personnel Management (RG 478), which Landon R. Y. Storrs rescued from historical obscurity and used so effectively in her excellent Second Red Scare and the Unmaking of the New Deal Left (2013).]
Posted by Dan Ernst at 12:30 AM