New Release: "Patriation and Its Consequences" 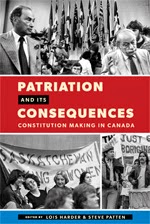 Few moments in Canadian history are as intriguing as the "patriation" of Canada’s constitution from Britain. Over the years, the tale of the political battle between Prime Minister Pierre Trudeau and the "Gang of Eight" provincial premiers opposing his patriation plans has developed mythical status. Constitutional lore suggests Canadians would not have a patriated constitution and entrenched the Charter of Rights and Freedoms if not for some last-minute negotiations that took place in a hotel kitchen the night of 4 November 1981 – a night Quebec Premier René Lévesque famously described as the "Night of the Long Knives," when his seven provincial allies deserted him.
In an effort to look beyond this familiar narrative, Patriation and Its Consequences: Constitution Making in Canada revisits these negotiations and the personalities, visions, and struggles that shaped the resulting constitutional agreement. Offering fresh perspectives on the politics of this key moment in Canadian history, it focuses on the players behind the patriation process, including First Nations and feminist activists, who helped shape Canada’s new constitution.

The volume also examines the long shadow of patriation, including the alienation of Quebec, the character of Canadian federalism, Indigenous constitutionalism and Aboriginal treaty rights, and the struggle to ensure gender equality rights in Canada.

The TOC (and a link to Eric Adams's chapter), follows after the jump:

1 Looking Back on Patriation and Its Consequences / Lois Harder and Steve Patten
2 Constituting Constitutions: The Patriation Moment / Janine Brodie

3 Constitutional Nationalism: Politics, Law, and Culture on the Road to Patriation / Eric M. Adams
4 The Evolution of the Charter / Barry L. Strayer
5 The Rise of Spectator Constitutionalism, 1967-81 / P.E. Bryden

6 Law, Politics, and the Patriation Reference of 1981 / Philip Girard
7 The Judiciary in Trudeau’s Constitutional Vision: Intellectual Trajectory and Origins of the Charter / David Schneiderman
8 More Distress than Enchantment: The Constitutional Negotiations of November 1981 Seen from Quebec / Guy Laforest and Rosalie Readman
9 Tracking Justice: The Constitution Express to Section 35 and Beyond / Louise Mandell and Leslie Hall Pinder
10 "28 -- Helluva Lot to Lose in 27 Days": The Ad Hoc Committee and Women’s Constitutional Activism in the Era of Patriation / Marilou McPhedran, Judith Erola, and Loren Braul

Part 4: The Political and Constitutional Consequences of Patriation

11 Patriation and the Law of Unintended Consequences / Peter Russell
12 Canadian Federalism since Patriation: Advancing a Federalism of Empowerment / Alain-G. Gagnon and Alex Schwartz
13 An Indigenous Constitutional Paradox: Both Monumental Achievement and Monumental Defeat / Kiera Ladner
14 The Sad but True Story of a Shrinking Equality Opportunity Structure / Alexandra Dobrowolsky
Posted by Dan Ernst at 12:30 AM