Out this month from: The Campaign to Impeach Justice William O. Douglas: Nixon, Vietnam, and the Conservative Attack on Judicial Independence  (University Press of Kansas), by Joshua E. Kastenberg, University of New Mexico School of Law: 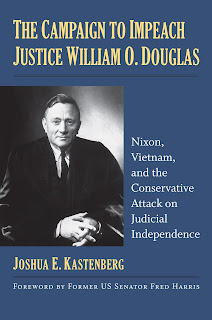 The politics of division and distraction, conservatives’ claims of liberalism’s dangers, the wisdom of amoral foreign policy, a partisan challenge to a Supreme Court justice, and threats to the constitutionally mandated balance between the three branches of government: however of the moment these matters might seem, they are clearly presaged in events chronicled by Joshua E. Kastenberg in this book, the first in-depth account of a campaign to impeach Supreme Court justice William O. Douglas nearly fifty years ago.

On April 15, 1970, at President Richard Nixon’s behest, Republican House Minority Leader Gerald Ford brazenly called for the impeachment of Douglas, the nation’s leading liberal judge—and the House Judiciary Committee responded with a six-month investigation, while the Senate awaited a potential trial that never occurred. Ford’s actions against Douglas mirrored the anger that millions of Americans, then as now, harbored toward changing social, economic, and moral norms, and a federal government seemingly unconcerned with the lives of everyday working white Americans. Those actions also reflected, as this book reveals, what came to be known as the Republicans’ “southern strategy,” a cynical attempt to exploit the hostility of white southern voters toward the civil rights movement. Kastenberg describes the political actors, ambitions, alliances, and maneuvers behind the move to impeach Douglas—including the Nixon administration’s vain hope of deflecting attention from a surprisingly unpopular invasion of Cambodia—and follows the ill-advised effort to its ignominious conclusion, with consequences that resonate to this day.

Marking a turning point in American politics, The Campaign to Impeach Justice William O. Douglas is a sobering, cautionary tale, a critical chapter in the history of constitutional malfeasance, and a reminder of the importance of judicial independence in a politically polarized age.

“After his ‘Wild Bill’ decade in the 1960s, Justice William O. Douglas had every reason to fear being impeached in 1970, especially when Republican minority leader Gerald R. Ford, at the behest of the Nixon administration, argued that ‘high crimes and misdemeanors’ should be ‘whatever a majority of the House of Representatives considers [them] to be at a moment in history.’ Joshua E. Kastenberg’s exhaustive review of the unpublished congressional and Supreme Court documents unlocks the mystery of how Douglas survived the most serious threat to American judicial independence since the 1804 impeachment of Justice Samuel Chase. This book’s thorough analysis of the politics of the impeachment process makes it truly instructive for our times.”
—Bruce Allen Murphy, author of Wild Bill: The Legend and Life of William O. Douglas
Posted by Dan Ernst at 12:30 AM