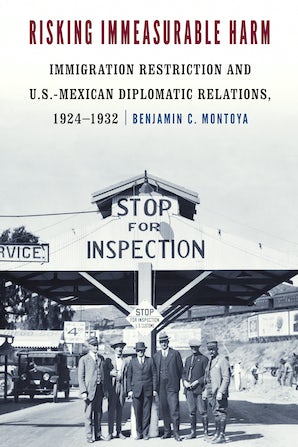 The debate over restricting the number of Mexican immigrants to the United States began early in the twentieth century, a time when U.S.-Mexican relations were still tenuous following the Mexican Revolution and when heated conflicts over mineral rights, primarily oil, were raging between the two nations. Though Mexico had economic reasons for curbing emigration, the racist tone of the quota debate taking place in the United States offended Mexicans’ national pride and played a large part in obstructing mutual support for immigration restriction between the United States and Mexico.

Risking Immeasurable Harm explains how the prospect of immigration restriction affects diplomatic relations by analyzing U.S. efforts to place a quota on immigration from Mexico during the late 1920s and early 1930s. The controversial quota raised important questions about how domestic immigration policy debates had international consequences, primarily how the racist justifications for immigration restriction threatened to undermine U.S. relations with Mexico.

Benjamin C. Montoya follows the quota debate from its origin in 1924, spurred by the passage of the Immigration Act, to its conclusion in 1932. He examines congressional policy debate and the U.S. State Department’s steady opposition to the quota scheme. Despite the concerns of American diplomats, in 1930 the Senate passed the Harris Bill, which singled out Mexico among all other Latin American nations for immigration restriction. The lingering effects of the quota debates continued to strain diplomatic relations between the United States and Mexico beyond the Great Depression.

Relevant to current debates about immigration and the role of restrictions in inter-American diplomacy, Risking Immeasurable Harm demonstrates the correlation of immigration restriction and diplomacy, the ways racism can affect diplomatic relations, and how domestic immigration policy can have international consequences.


“This carefully researched and elegantly crafted book provides timely lessons on the importance of building and sustaining bilateral diplomatic relationships across the Mexico-U.S. border. Montoya’s new analysis of early twentieth-century legislative practices reminds us that marginalized immigrants have always been central to the discourses and practices of state sovereignty and nation formation.”—Mark Overmyer-Velázquez

“Timely and pathbreaking. . . . With a focus on diplomacy and politics from the mid-1920s to the early 1930s, Risking Immeasurable Harm sheds new light on U.S.-Mexican diplomatic developments as they relate to controversies over quotas, racism, sovereignty, and immigration restriction. This important book reveals how and why diplomacy factored centrally in the failure of congressional attempts to restrict Mexican migration, even as the United States implemented draconian cuts to overall immigration.”—Christopher McKnight Nichols