Auerbach on the London Police Courts

Sascha Auerbach (University of Nottingham) has published Armed with Sword and Scales: Law, Culture, and Local Courtrooms in London, 1860-1913 with Cambridge University Press. From the publisher: 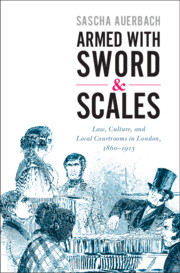 In the mid-eighteenth century, author and magistrate Henry Fielding adjudicated cases of theft, assault, and public disorder from his London home on Bow Street. By the middle of the nineteenth century, Fielding's modest 'police office' had expanded to become the most prolific court system in Britain and the cornerstone of criminal and civil justice in the metropolis. Sascha Auerbach examines the fascinating history of this institution through the lens of 'courtroom culture' – the combination of formal statute and informal custom that guided everyday practice in the London Police Courts. He offers a new model for understanding the relationship between law, culture, and society in modern Britain and illuminates how the local courtroom became a crucial part of everyday life and thoroughly entangled with popular representations of justice and morality.

"This lively social history of the London courtroom treats it as a space of encounter between the modern self and the modern state. British law-and-order values were shaped by Victorian 'courtroom culture' and the ordinary people - including working-class women - for whom it served as a site of both contest and community." - Antoinette Burton

"An authoritative and engaging study of a key institution of the modern British state, whose importance has been largely overlooked. The book takes an admirably expansive view, looking at how the stipendiary courts functioned, how they were portrayed and how they served different constituencies, including those of gender and class." - Jennifer Davis

"Victorian police courts were sites of education, disputation, score-settling and problem-solving, where moral prescriptions and life lessons were issued, contested, and avidly chronicled by a growing local press. Sascha Auerbach's authoritative, deftly written and entertaining account shows how central and significant this little-understood institution was to the lives of the working class of Victorian London." - John Davis

"An ambitious study of Victorian and Edwardian crime and criminal law, focused on the least studied, but crucially important, summary 'police' courts: their magistrates, their clientele, and their audiences. Triangulating from the perspectives offered by criminal statistics, parliamentary reports, and particularly the popular and elite press, the book seeks to explain the 'courtroom culture' of a critical institution that mediated class relations. It shows how newspaper representations of summary justice, driven largely but not entirely by commercial competition, evolved during great changes in Victorian society and London's municipal government." - Douglas Hay