Nunley's "At the Threshold of Liberty" 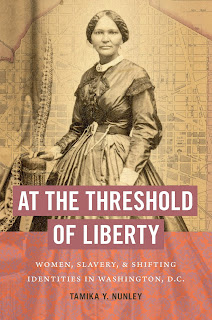 The capital city of a nation founded on the premise of liberty, nineteenth-century Washington, D.C., was both an entrepôt of urban slavery and the target of abolitionist ferment. The growing slave trade and the enactment of Black codes placed the city’s Black women within the rigid confines of a social hierarchy ordered by race and gender. At the Threshold of Liberty reveals how these women--enslaved, fugitive, and free--imagined new identities and lives beyond the oppressive restrictions intended to prevent them from ever experiencing liberty, self-respect, and power.

Consulting newspapers, government documents, letters, abolitionist records, legislation, and memoirs, Tamika Y. Nunley traces how Black women navigated social and legal proscriptions to develop their own ideas about liberty as they escaped from slavery, initiated freedom suits, created entrepreneurial economies, pursued education, and participated in political work. In telling these stories, Nunley places Black women at the vanguard of the history of Washington, D.C., and the momentous transformations of nineteenth-century America.

Here is an endorsement:

"Tamika Y. Nunley has written a nuanced, humane, and powerful history of Black women's freedom-making in Washington, D.C. At the Threshold of Liberty is a major contribution."--William G. Thomas III, author of A Question of Freedom: The Families Who Challenged Slavery from the Nation’s Founding to the Civil War