Gehrig on law and rights in divided Germany 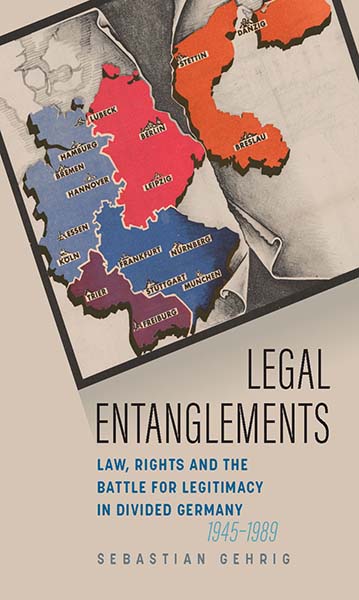 Sebastian Gehrig (University of Roehampton) has published Legal Entanglements: Law, Rights and the Battle for Legitimacy in Divided Germany, 1945-1989 with Berghahn. From the press:

During the division of Germany, law became the object of ideological conflicts and the means by which the two national governments conducted their battle over political legitimacy. Legal Entanglements explores how these dynamics produced competing concepts of statehood and sovereignty, all centered on citizens and their rights. Drawing on wide-ranging archival sources, including recently declassified documents, Sebastian Gehrig traces how politicians, diplomats, judges, lawyers, activists and intellectuals navigated the struggle between legal ideologies under the pressures of the Cold War and decolonization. As he shows, in their response to global debates over international law and human rights, their work kept the legal cultures of both German states entangled until 1989.

“Legal Entanglements shows that although the two Germanys were divided by Cold War politics, their approaches to sovereignty, citizenship and law were deeply intertwined, as the two states navigated both their shared past and the transformation of international law in an era of decolonization. Deeply researched and lucidly written, Gehrig’s book will be essential reading for scholars of modern Germany, internationalism, and human rights.” - Celia Donert

“A pioneering comparative study of divided Germany’s contest over legal justice after 1945, showing how their rival understandings of law and citizen rights reflected broader claims of political legitimacy, territorial sovereignty and national identity in a fast-changing postwar world. A must read for anyone interested in the relationship between German legal history and Cold War international relations.” - Paul Betts

“With innovative methodology and conceptualization, Gehrig analyzes legal-political debates that will be of interest to historians of modern Germany and to scholars interested in the history of both decolonization and the global human rights regime within which his story plays out.” - Young-sun Hong

“Legal Entanglements is a welcome addition to the literature of postwar German history, covering a very interesting aspect of this period in-depth for the first time.” - Armin Grünbacher